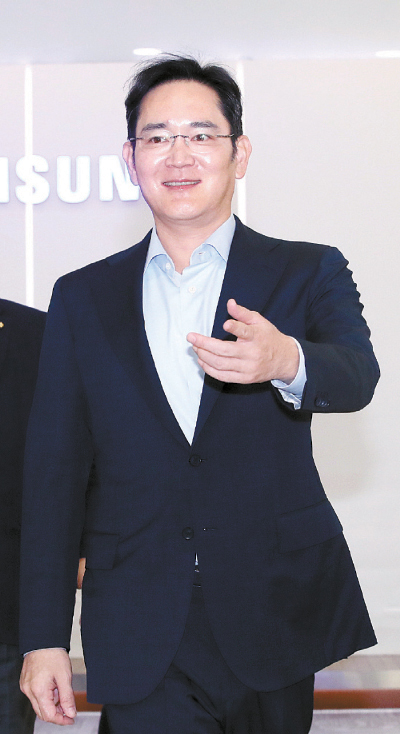 In 1969, Samsung Electronics had just 36 employees. Half a century later, the electronics maker generates 13 percent of Korea’s entire GDP and is the global leader in 12 product sectors - including DRAM memory chips and smartphones.

Marking that 50th anniversary, Samsung Electronics Vice Chairman Lee Jae-yong, the de facto leader of the company after his father and grandfather, shared his vision for a successful 100-year-old company, putting the focus on employees’ imaginations and corporate responsibility.

“Our journey in the past 50 years was possible thanks to your devotion and effort,” Lee said in a video message played during an internal ceremony held Friday at Samsung’s Suwon headquarters in Gyeonggi.

“For the next 50 years, let’s continue to dream and imagine,” he added, while emphasizing that the company’s future depends on just how far ahead its employees are able to envision.

Lee stressed that the company’s goal is to develop technology in a way that can enrich people’s lives and benefit mankind and society. “The path to being the world’s greatest is to share and grow, hand in hand,” he added.

Despite celebrating Samsung’s 50th birthday, the internal event was a quiet one. Lee, who has not attended the annual birthday party since 2017, was once again absent.

Instead, he was on a business trip in Japan, which local media outlets reported was to meet with Japanese partners to discuss future business plans. Samsung did not confirm details of the trip.

Samsung Electronics’ history traces back to 1969 when it started out as a manufacturer of black-and-white TVs. It celebrates its anniversary on Nov. 1, the date that it merged with its semiconductor and telecommunications units in 1988. In the 1990s, the company entered the phone market.

The decisions to jump into chips and phones were deemed too bold and unrealistic at a time when Korea was still an economically developing country.

The chip business was driven by Samsung founder Lee Byung-chul. In less than 10 years after he announced the launch of the DRAM memory business, Samsung developed the world’s first 64K DRAM chips ahead of Japanese and U.S. companies that were leading the chip market. Today, it makes up 40 percent of the global DRAM memory market and has been the No. 1 manufacturer for 28 years straight.

In the mid-1990s, Samsung started to shift from quantity to quality. In 1995, Samsung Chairman Lee Kun-hee, Lee Jae-yong’s father, famously summoned executives and told them to literally smash up Samsung phones and set them on fire. Fifteen years later, the company released the Galaxy smartphone.

But the electronics maker now faces uncertainties on a scale it hasn’t encountered in its 50-year history. The U.S-China trade war, Japan’s export restrictions on core materials for chip and display production and a slowing memory chip market are all negative factors hitting Samsung’s performance projections. Management stability is also at risk due to the ongoing trial of Lee Jae-yong on bribery charges concerning former President Park Geun-hye.

As for Lee, the de facto leader is keeping up with investments. In a meeting with senior executives last June, Lee said Samsung’s “constant innovation” had come from investments that never ceased, even during difficult times.

This year alone, Samsung has announced 133 trillion won ($114 billion) in investment in non-memory chips in April and recently unveiled a 13-trillion-won plan in manufacturing next-generation displays.