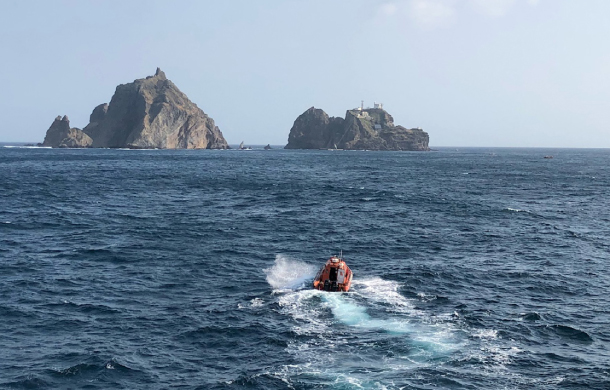 Search and rescue efforts are underway in the East Sea Friday after a helicopter crashed in waters near the Dokdo islets the previous night, leaving seven people missing. Authorities found the chopper and a body suspected to be a victim in the afternoon. [YONHAP]

Fourteen hours after search operations began to find a helicopter that crashed near the Dokdo islets in the East Sea, officials said Friday that they have located the chopper.

“Three Korea Coast Guard divers who were searching in seas 600 meters [2000 feet] south of the Dokdo islets and 72 meters underwater between 1:35 p.m. and 2:25 p.m. found the rescue chopper,” a police official said at a press briefing at the Korea Coast Guard office in Donghae near the East Sea.

“Now that the chopper has been found, we will focus on further search and rescue operations,” the official said, adding that the Cheonghaejin salvage ship and another submarine rescue ship will arrive at the scene later in the day.

The missing chopper took off from Dokdo at around 11:26 p.m. on Thursday before falling into waters near the islets just a few minutes later. Seven Koreans, including an injured person from a fishing boat and five rescue officials were reportedly on board.

Officials later said that they recovered the body of a person suspected to be one of the victims.

The National Fire Agency said it introduced the EC225 Super Puma long-range passenger transport helicopter, developed by Eurocopter, in 2016. The two pilots were both veterans with at least 17 years of career experience, according to the agency.

The model is the same as the helicopter that crashed off the coast of Norway in April 2016. That chopper’s main rotor blades separated from its body, causing a crash that killed all 13 people aboard.

Prime Minister Lee Nak-yon ordered relevant ministries to put in full-fledged efforts to rescue survivors and search for missing passengers. President Moon Jae-in ordered a safety inspection of the crashed model, according to the Blue House spokesperson. The missing chopper can carry up to 28 passengers and fly at 324 kilometers per hour (201 miles per hour). The crashed EC225 chopper and an additional one had been in operation by local fire authorities and were mostly used to rescue people and fight wildfires. The other one is in service to cover Seoul and nearby Gyeonggi.