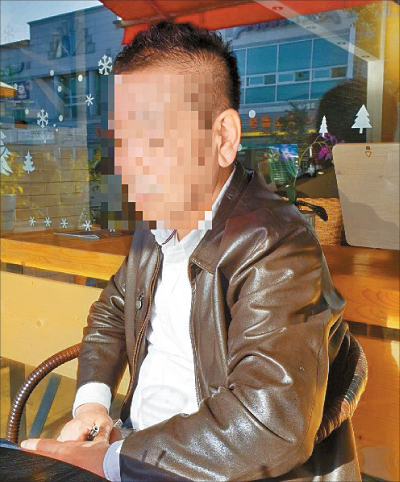 A 67-year-old man talks about his story of winning the lottery, only to lose it all within a year, at a coffee shop located in Jeonju, North Jeolla, on Monday. His face has been pixelated as requested. [KIM JUN-HEE]

When the JoongAng Ilbo ran a story about a man who hit the jackpot in the lottery, only to lose it all a year later, it didn’t expect the response it got.

After reading the story which ran last Sunday, the 67-year-old man asked to be interviewed, so he could tell his version of the events.

Although he admitted that the story was “largely true,” the JoongAng Ilbo sat down with the man at a coffee shop located in Jeonju, North Jeolla, on Monday. “If you want to write my story, please write it accurately,” he said.

Q. When and how much did you win in the lottery?

A. I won a payout of around 5.1 billion ($4.4 million) won from the lottery in December 2003 and received about 4 billion won after taxes.

How many lottery tickets did you buy at the time?

Why didn’t you tell your family that you won the lottery?

For about a year before I won the lottery, I hadn’t gone home and had been living with a friend.

My friend and I were always at gambling tables. When I went back home after gambling and smoking, the smell of cigarettes was not good for my two children. My children were elementary school students at the time.

How did you spend all the money?

I moved to Seoul with my friend [who I always gambled with] to invest in a business and effectively lost about 4 billion won in six months. The rumors surrounding me [that he had spent billions of won on alcohol and entertainment] are not true.

Can you be more specific?

What did you tell your wife when you moved to Seoul?

My wife doesn’t care about me because I always wander from place to place like a goblin. Because I have itchy feet, I only went home once or twice a year throughout the entirety of my marriage.

When you and your family were staying in Seoul, who was your family’s breadwinner?

My father gave my wife living expenses and provided my children’s monthly tuition fees. I wandered from place to place at the time. In addition to my father, my in-laws have a fortune worth billions, so we could live well even if I hadn’t won the lottery.

Did your wife forgive you for not telling her about your lottery win?

Do you ever regret losing all your money?

No. Never. I’m optimistic by nature and don’t blame others. My two daughters, who are in their 30s now, grew up very well. They lived their own lives well, not believing in my abilities. They both were hired by major companies in the country. They love me as much as I love them and understand my thoughts as they are.