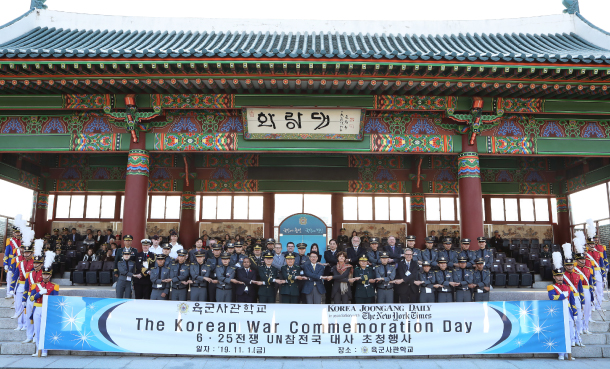 Ryu Kwon-ha, CEO of the Korea JoongAng Daily, center right, and Lt. Gen. Chung Jin-kyung, superintendent of the Korea Military Academy (KMA), center left, co-host of The Korean War Commemoration Day, pose with ambassadors and diplomats whose countries sent military troops and medical assistance to South Korea during the 1950-53 Korean War and KMA cadets at the academy in Nowon District, northern Seoul, on Friday. The event was held to commemorate next year’s 70th anniversary of the outbreak of the war. [PARK SANG-MOON]

Ambassadors and diplomats from countries who sent combat forces and medical aid to South Korea during the 1950-53 Korean War as members of the United Nations gathered at the Korea Military Academy (KMA) in Nowon District, northern Seoul, on Friday to remember the sacrifices made during the devastating war.

The Korean War Commemoration Day, co-hosted by the Korea JoongAng Daily and the KMA, was held on the school’s campus to commemorate next year’s 70th anniversary of the outbreak of the war.

Twenty-one UN member states contributed to the UN force, and dignitaries from nearly half of their embassies in Seoul participated in Friday’s event, including Canada, Britain, Colombia, South Africa, Turkey, Sweden, the Netherlands and Thailand. The EU Mission also participated.

The guests took a brief tour of the school campus, saw a photo exhibition of the Korean War and observed the school’s weekly Hwarang Ceremony, a parade that’s performed by the cadets to reflect on their past week and plan the upcoming week while reminding themselves of their moral duties.

“When South Korea was attacked by the North on the 25th of June, 1950, the government of the Kingdom of the Netherlands decided that same year to answer the call of the Security Council of the United Nations and send troops to Korea,” Dutch Ambassador to Korea Joanne Doornewaard said in her congratulatory remarks during a reception.

During the Korean War, Doornewaard elaborated about how the Dutch battalion was dispatched to Hoengseong County, Gangwon. In Hoengseong, the Dutch troops defended the line against the attacking Chinese and North Korean troops, the top envoy noted. In total, 123 Dutch soldiers lost their lives in the Korean War, together with 40 Korean soldiers at their side, said Doornewaard.

Ryu Kwon-ha, CEO of the Korea JoongAng Daily, thanked the sending states for fighting side by side with South Korea, attributing Korea’s current economic development to their “blood, sweat and tears.”

“We couldn’t have done it without you,” said Ryu, “without the generous help of your countries.”

He went on, “Their blood, sweat and tears are what enabled us to get through three years of conflict and to thrive in the following peaceful decades. They were our brothers and sisters, our true comrades.”

Lt. Gen. Chung Jin-kyung, superintendent of the KMA, mentioned how 151 cadets sacrificed their lives in the Korean War.

The KMA will take the initiative in making “meaningful changes” and perform its “role as the first mover,” Chung stressed.