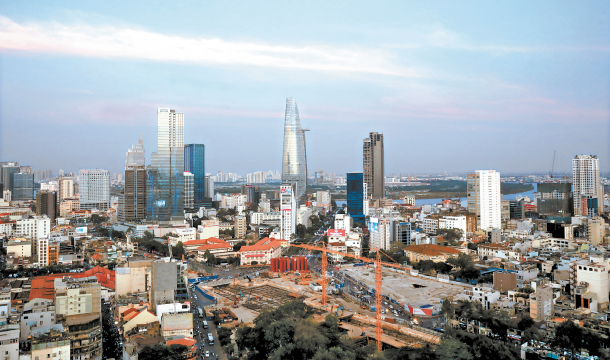 Ho Chi Minh City, Vietnam, is becoming one of the most popular destinations for investment. Korean individuals invested ＄21 million in property Vietnam in the first half of the year. [KIM HYUNG-BIN]

Last month, a businessman surnamed Kim, who is in his 60s, visited Manhattan, New York City, for a real estate tour. The custom one-on-one package was offered by London-based Knight Frank.

During the tour, Kim looked at two luxury condos and a model house in midtown Manhattan. A 132-square-meter (1,421-square-foot) apartment was priced between 4 billion won ($3.4 million) and 5 billion won.

For wealthy Koreans like Kim, the time has come to abandon ship.

Korea’s teetering economy, hostile tax policy and uncertainties about the future have prompted the rich to prepare for an exit plan - the so-called “Korean Exodus.”

Korea is bleeding money as the wealthy liquidate their assets to invest in less risky markets in advanced countries and more rich-friendly Southeast Asian nations. Some are even buying their way out through investment immigration. 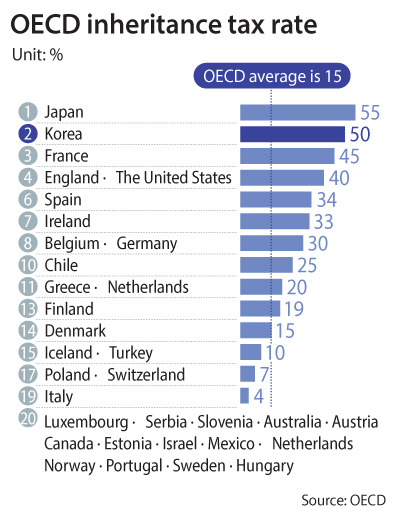 “Due to a significant increase in the number of inquiries from high-net-worth individuals regarding foreign real estate investments, real estate tours previously limited to institutional investors, such as pension funds, have been available to individual investors since three months ago,” said an official from Knight Frank Korea.

Uncertainties about the future is the main reason behind the interest in foreign markets on the part of the wealthy. They are increasingly making moves as they are worried about the slow growth of the Korean economy and an increased tax burden.

“Because of harsher taxation, the rich are doubtful whether they can protect their assets properly and bequeath them to their children after the government introduced a new income tax bracket,” said Kim In-eung, the head of Woori Bank’s sales division.

According to a survey conducted by KEB Hana Bank earlier this year of 922 people with cash assets over 1 billion won, more than half responded that “the economy will stagnate” for the next five years.

For rich with such pessimistic views, foreign real estate shopping is the most preferred method for transferring assets overseas.

“People with assets over 3 billion in cash prefer advanced countries such as the United States and Japan where risks are low,” said Yang Yong-hwa, head consultant on property investment at KEB Hana Bank.

“When looking for rental properties, office and commercial buildings in Tokyo, Japan or Manhattan are more attractive than those in Seoul, which have high vacancy rates.”

In the meantime, people with assets under 500 million won on hand looking for high returns are heading to countries in Southeast Asia, such as Vietnam and Malaysia.

“Foreign real estate is gaining popularity among investors as these are exempted from Korean real estate tax and can benefit from light tax burdens as local governments provide tax deductions,” said a real estate expert who wished to remain anonymous.

The Korean Exodus is also apparent in the stock market.

A 63-year-old surnamed Lee liquidated a fixed investment worth 100 million won deposited in a Korean equity fund and invested the money in U.S. stocks and foreign equity funds. The weak performance of local stocks was too much of a risk.

“This year, clients uncertain of domestic politics and the economic situation are managing their portfolios by increasing the portion of foreign stocks and funds to up to 20 percent,” said Lee, who works at a finance firm in Apgujeong, southern Seoul. “Demand for dollars is increasing, and one client even spent as much as 2 billion won to buy dollars.”

Some wealthy Koreans are taking the Korean Exodus to the next level. Not only moving their asset overseas, they are looking for a way out for themselves.

Every weekend, immigration information sessions are in full swing in hotels located in Gangnam District, southern Seoul. As more wealthy individuals are reviewing investment immigration options, immigration seminars are booming in Busan and Jeju as well. The EB-5 investor program is the most preferred entry to the United States for the rich.

“Unlike Canada or Australia, which evaluate applicants by English proficiency and investment amount, the United States grants visas to people who make $500,000 investments that can generate jobs,” said an official from immigration consultancy firm Coryo Emigration.

“Demand is pouring in to catch the last train to immigration before the minimum investment amount is adjusted to $900,000 next month.”

For rich Koreans, investment immigration is seen as insurance. While people sought permanent residency in the past for the purpose of supporting their children’s education, now, from young people in their 20s to the elderly in their 60s or 70s, Koreans of all ages are applying for green cards as get-out-of-Korea cards to prepare for the uncertain future.

“I worked hard and paid my taxes. But I’m considering immigration as the rich are increasingly being neglected in Korean society,” said Lee, who runs a small company. “I want to live in another country away from the fine dust and the current politics, which drives an ideological wedge between family members.”

Due to the cost of immigration, people in their 20s are leaving the country with help of their parents.

According the Ministry of Foreign Affairs, the United States, Canada, Australia and New Zealand are some of the most preferred immigration destinations.

Canada and Australia repealed inheritance tax in the 1970s, and New Zealand followed suit in 1992. The United States raised the tax deduction rate for the gift tax twofold to $11.2 million from $5.49 million. Singapore, favored by Korean businesspeople, doesn’t levy inheritance or gift taxes.

Some experts dub this immigration fever as the “global nomad” phenomenon, a trend of switching countries to live in, in pursuit of jobs, education and in some cases, clean air. “Malaysia is bustling with Koreans,” said Cho Hyeon, CEO of U1 International & U1 Consultancy.