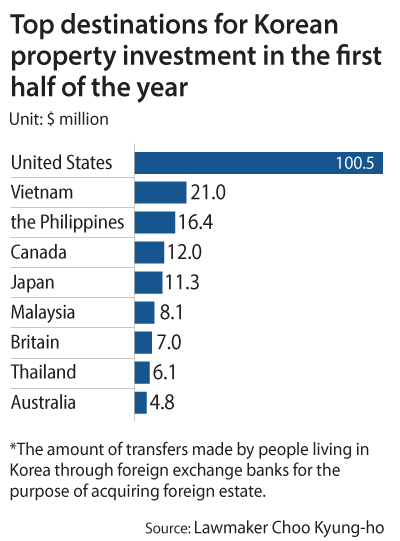 Near a 30-story condominium under construction at Puteri Harbor in Johor Bahru, Malaysia, last month, a large group of Koreans was touring the city.

Despite appearances, they were not visitors out sightseeing or travelers trying out Malaysian cuisine. In this case, these Koreans were in the southernmost city of Malaysia to look into immigration.

“Unlike other countries in Southeast Asia, Malaysia acknowledges complete corporate ownership, and as it requires less money for me to establish a business, I plan to open a cafe here,” said a 37-year-old surnamed Yoo preparing to move to Johor Bahru.

“Even if I can’t open the business, I can just deposit the money in a Malaysian bank to get 4 percent annual interest. Whatever the case may be, there’s a lot more chance for me to make money here than just staying in Korea.”

Some Koreans are planning to leave their home country to avoid high taxes and labor costs.

“I decided to leave Korea due to the stress stemming from [high] labor costs and various tax issues,” said Lee, a businessperson in their 40s. “Malaysia doesn’t even tax inheritance and estates, so I am planning to gradually liquidate my assets in Korea as well.”

Yoo and Lee are not alone in looking to escape Korea for better living and business conditions. The number of those interested in immigrating to foreign countries has greatly increased in recent years, and related seminars and conferences are a booming business in the wealthy Gangnam District, southern Seoul, as well as in other major areas, such as Busan and Jeju.

“About 30 to 40 people come here every month on preliminary visits to check out the living environment and housing options,” said Cho Hyeon, CEO of U1 International & U1 Consultancy, an immigration company, in discussing the increasing number of visitors to Johor Bahru. “The number of 10-year long-term visa applications doubled to 1,500 last year from a year earlier.”

Many of those seeking other countries like Malaysia as their next home are leaving Korea due to worries that the country’s economic instability could hurt their businesses and make life more challenging. The immigration boom reflects frustration about their country’s prospects.

“Considering the recent state of the Korean economy and the direction of government policy, uncertainties among the rich are growing, and the sense is that time is against them to protect their assets,” said Kim In-eung, head of Woori Bank’s sales division. “They are trying to buy permanent residency as a contingency plan to begin a new life anytime they wish.”

They are buying a sort of insurance.

According to the U.S. State Department, the number of Koreans granted investment immigration visas last year more than doubled on year to 531.

It’s not just regular workers joining the exodus. Business owners have rolled up their sleeves to find places with better business conditions, like cheaper labor and better tax structures.

Most of them are eyeing Southeast Asia. With balance sheets challenged, some relocate their factories to the region for lower labor costs and tariff advantages.

The relocations reduce jobs in Korea, leading to a vicious circle.

Large-sized companies are also accelerating their moves overseas. While many of them claim such shifts are a means to expand footprints in the global market, they are also decentralizing out of Korea to escape the reality of the low birth rate, aging population and regulations.

“This month, four businesspeople of our clients applied for investment immigration to the United States,” said a private banker who requested anonymity. “Unlike the past, when CEOs stayed in Korea to manage their businesses while sending their children to study abroad, more CEOs are now liquidating businesses or shifting them overseas. It isn’t easy for them to stay afloat with mounting labor costs from minimum wage hikes and the 52-hour workweek.”

A top executive for an auto parts manufacturer recently headed to Singapore with his family and left his company behind in Korea. He is almost giving up on the company after trying to figure out how to leave the assets to his family.

“Meeting conditions for inheritance tax relief on a family business was challenging, and the whole process required tens of millions of dollars,” he said. “My health deteriorated from tax stress, and I had to just stay out of Korea for now with a heavy heart that I might have to give up my company.”

Life has gotten better for many who pushed through with their decision to leave Korea. Some are spending less on their children’s education while others are enjoying better business conditions.

“As we live just 30 minutes away from Singapore, our financial living conditions much improved as living expenses are much cheaper here compared to Korea,” said a couple who moved to Johor Bahru this year. “Tuition for international schools is around 10 million won ($8,438), so we are really satisfied with the low economic burden for our children’s education.”

Malaysia is especially on the rise as a new destination for immigration as the bar on investment is much lower than that of other countries.

Any applicant below the age of 50 with assets over 500,000 ringgit ($119,370) and monthly income over 10,000 ringgit are eligible for the Malaysia My Second Home (MM2H) visa. The visa serves as a de facto permanent residency as it can be renewed every 10 years.

“As Johor Bahru became popular by word of mouth among Koreans, about 5,000 Koreans are living in the city,” said Oh Hyeon-sik, a former chairman of Korean Association of Johor Bahru.

With people pouring into Johor Bahru, dozens of luxury condos are being built along the coast.

When oceanfront land was exhausted, a residential area called Forest City was constructed on an artificial island.

An 89.2-square-meter (960-square-foot) condominium with a swimming pool and shopping center costs 350 million won, cheaper than an apartment of the same size in Seoul.

“As of now, 7,000 units have been sold, and 5 percent of the purchases have been made by those living in Korea and Koreans living in China and Singapore,” said a sales official at R&F Group, developer of the R&F Princess Cove condominium in Johor Bahru.

Experts say the so-called “Korean Exodus” of people, companies and money leaving the country is the result of rapid social changes.

“As local investments in Korea do not promise enough profit, money is getting out,” said Yi In-sil, a professor at Sogang University and the chairwoman of the Korea Economic Association.

“Even hints of political bipartisanship and the rolling back of anti-corporate policies would be enough to keep human resources and companies from leaving the country,” said Yoon Chang-hyun, an economics professor at Seoul University, calling for a “U-turn” as a solution.