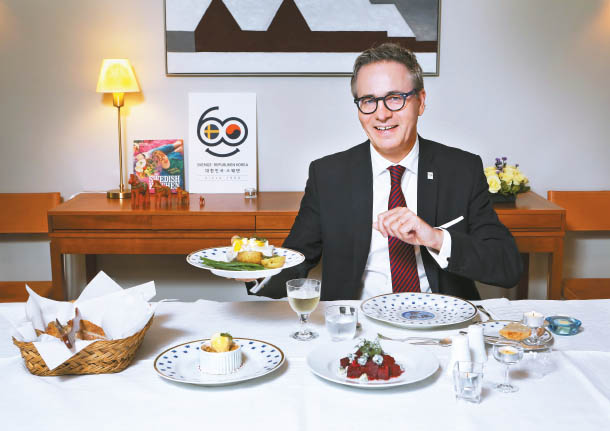 Jakob Hallgren, ambassador of Sweden to the Republic of Korea, presents some of Sweden’s signature dishes during an interview with the Korea JoongAng Daily at his residence in central Seoul on Oct. 8. [PARK SANG-MOON]

If you could recommend one book to read about your country, which would it be and why?
We are asking these questions to ambassadors in Seoul for our latest public diplomacy series, “Table Talk.” The book, its author and what they say about the country are discussed over a table full of national dishes. What better way to start an exploration of a new land than through food, good writing and a personal guide dedicated to building bridges between countries — right here in Korea? - Ed.

The Swedes have their own style of nunchi when it comes to dealing with people.

“I’d say that much of what you described about nunchi is similar to the concept of lagom, that it helps as a regulator for how you relate to other people,” said Jakob Hallgren, ambassador of Sweden to the Republic of Korea.

Lagom, a way of striving for balance, is a concept that many Swedes apply in their daily lives without even thinking about it - it could be during their dinner conversations, in the way they consume and design products or even in the way of diplomacy.

“Not the middle. Not average. Not complacency. Just right,” wrote Lola Akinmade Akerstrom in her book, “Lagom: The Swedish Secret of Living Well” (2017).

Nunchi is the Korean art of listening to and gauging other people in social settings that makes one a master of unspoken communications.

Korea and Sweden celebrated 60 years of their diplomatic ties this year. The ties have never been stronger, Hallgren said, and that may be attributed to the fact that many Koreans and Swedes grow up adjusting to each other’s lagom, while using nunchi.

“In diplomatic negotiations, it is one thing to be clear on what you think and another thing to corner your counterpart,” he said. “If I am talking to you with strong arguments but respecting you as a person and giving you an exit, then you will probably listen to the arguments while not feeling you are under a personal attack.”

The Korea JoongAng Daily sat down with Hallgren at his residence in central Seoul on Oct. 8 to speak about the concept of lagom and the Swedish psyche, which can be exhibited in diplomacy such as the longstanding Swedish role in communications between North Korea and the United States and also in the foundation for some family-centered welfare policies in Sweden such as the up to 480 days of paid parental leave per couple. The following are edited excerpts of the interview.

Q. Akerstrom in her book says that lagom has no definite definition, as each person’s idea of what’s lagom for them is different. What’s your definition of lagom?

A. The bare essential of the concept is that in life, you should not strive for extremes because that is not sustainable. So whatever you do, you should strive for some kind of balance, which is subjective because my balance is not your balance and your balance is not my balance. It’s essentially about aspiring for balance in individual life but also in the broader social context. So I’d say the concept is about applying balance in my own ideal way and relating that to the surrounding world.

The author touches on many aspects of life in Sweden and how they reflect the concept of lagom, including a common practice at work known as fika.

It’s the act of taking a break and drinking a cup of coffee or tea or something with your friends or co-workers. It happens when you are having a break during working hours, and it is often institutionalized. The quintessential fika is a cup of coffee with a kanelbullar (cinnamon bun).

We have it for everybody at the embassy every Friday. The magical thing about fika is that it often functions as a conflict solver and you get a lot of things done during a fika, without really calling it an office meeting.

We spoke earlier of lagom being applied in diplomacy. Do you think the Swedish psyche has helped the country play a role between North Korea and other countries?

As this year has shown, both in the meetings in Stockholm in January and recently, there is apparently a sense, on both North Korean and American [sides] - and back in January South Korea was also part of the discussions - that Sweden is a place that they are happy to go to for discussions like that, and we’ve always said that we think we have not only a specific role but also specific responsibility on the Korean Peninsula.

There is no other country with three missions on the peninsula, and I am thinking about the longstanding and strong relations with Korea, which started on Sept. 23, 1950, when the Swedish field hospital came; the fact that Sweden was the first western country to open diplomatic relations with North Korea in 1973 - we opened the embassy in 1975 and it’s been open ever since; that we have this particular mandate for the United States regarding protective power for consular affairs and for some other countries including Australia and the Nordics; and that we have been part of the Neutral Nations Supervisory Commission on the border since Aug. 1, 1953. No other country has that set of missions. We are not seeking a role, we’ve been given a role. 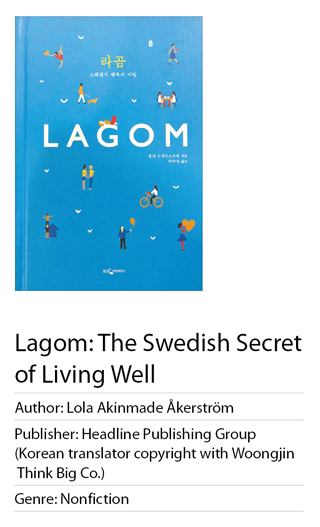 "Lagom: The Swedish Secret of Living Well" by Lola Akinmade Akerstrom introduces the concept of lagom, which can be defined as the Swedish way of striving for balance in life and how it may apply to what the Swedish people think and practice in culture, food, health, beauty and fashion, design, social life, work, money, nature and sustainability.

How do you assess the latest talks in Sweden?

I think we need to realize that we are part of a very long and difficult process. So the fact that they are meeting and that they did meet is extremely positive. Now it remains to be seen if the words expressed after the meeting, especially from the North Korean side, are definitive or are part of the negotiation. But they did come, they did spend two days together and I don’t think they have said that talks are closed.

How did you come to select this book for the interview?

I was thinking about various Swedish classics, but then someone told me about this book and I realized that it is quite a good description of some essential parts of the Swedish psyche, which I think might be interesting for the Korean audience.

Tell us about the dishes prepared for today’s interview and what characterizes them as especially Swedish.

Today we will start with oven-baked beetroot. Beetroot are sustainable vegetables that are sometimes overlooked. They are typical for the fall and have a fantastic taste on their own. The dish is arranged with blue cheese, which contrasts in taste.

The main dish is boiled cod with egg, fresh potatoes, green beans and horseradish dill butter sauce. Cod is around all year, but fall and winter are the better seasons for them. Where I grew up, in the southern part of Sweden close to the Oresund strait, they would typically be able to fish huge cod and cook them the same day.

The dessert today will be apple crumble, or smulpaj, with vanilla ice cream. Apples are ripe in this season, and the dish is what you would typically have for a fika or dessert this time of the year.

These are basic and simple dishes, but they encapsulate the Swedish gastronomic tradition.

Would you say Swedish people eat more home-cooked meals rather than dining out?

Before I came to Korea, when I worked in Stockholm, my wife and I would typically prepare dinners every second evening during the weekdays. I would prepare the dinner for three days per week, and she would do it for the other four days, or vice versa. It’s an expression of gender equality in households in Sweden.

In Sweden, almost 80 percent of women are working, so they’re not typically all staying at home.

In speaking of gender-equal households, what do you think about some Korean legislators’ call for the adoption of welfare policies similar to those of Sweden?

I mean every country needs to choose its own course and way.

For Sweden it started from an economic angle, because back in the 1950s and 1960s, the Swedish economy was booming, and there was a huge demand for Swedish products but there was a lack of labor. So part of the solution was to invite people from other countries to work - from Italy, Greece, Yugoslavia and other parts of Europe. But another solution was to ensure that all the women in society could work as well because then you could double the workforce.

But in order for that to work, you needed to institute day care which was credible and reliable, you know. The taxation which used to be filed jointly for couples became separate. When it’s separate, it provides incentives for the household to have two incomes.

Are there any upcoming events in Seoul to learn more about the Swedish psyche and lifestyle?

We have a number of events coming up in November. We are hosting Swedish Lifestyle Week at Sounds Hannam in central Seoul from Nov. 12 to 17. Throughout the month, we are also hosting the Swedish Film Festival in Seoul. The festival started in 2012 in Seoul and now extended to five cities including Busan, Gwangju, Incheon, and Daegu. Film is not only a cultural expression, it is also an important tool to understand society.

If you were there at the celebration of the National Day of Sweden earlier this year, you would have met some of the young designers in Korea who were awarded the Korea-Sweden Young Design Award by Korea Institute of Design Promotion(KIDP), IKEA Korea, Ung Svensk Form and the Swedish Embassy in Seoul. I invite you to enjoy the 20 finalists’ design exhibition at Design Korea Festival in Kintex, from Nov.6 to 10. Korea-Sweden Design Forum will be held in relation to this bilateral collaboration on design at the same venue, on Nov.7. 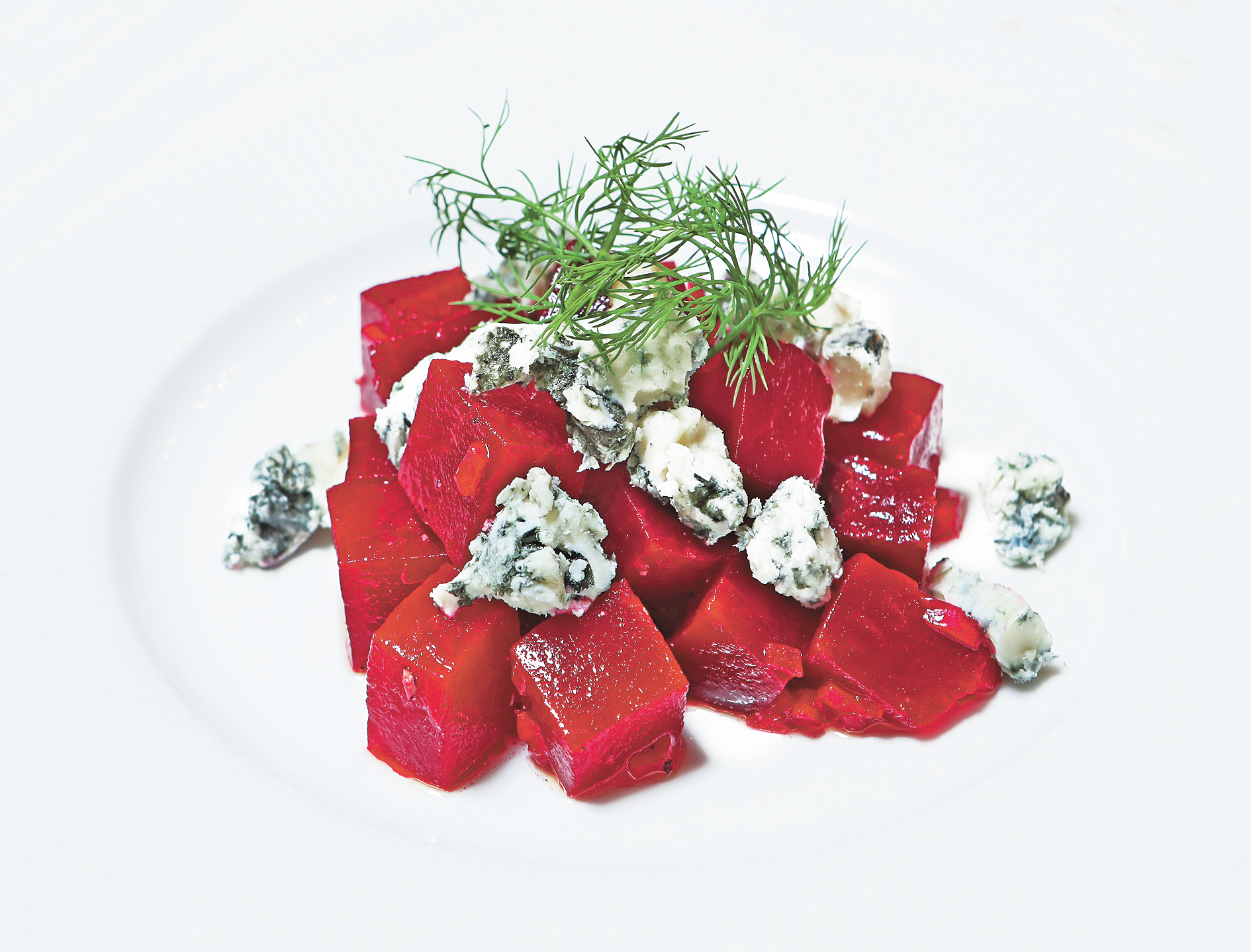 2. Rinse 200 grams (7 ounces) of beetroot. Mix the beetroot with half a tablespoon of olive oil and salt. Place in an ovenproof dish and cook for 40 minutes, until they are soft.

3. Peel and chop a quarter of a red onion into small pieces - mix with one tablespoon of red wine vinegar and 6 tablespoons of olive oil to make a vinaigrette.

4. Put 70 grams of blue cheese on a plate. Put beetroot and 25 grams of fresh raspberries on the cheese and add the vinaigrette. Serve with dill. 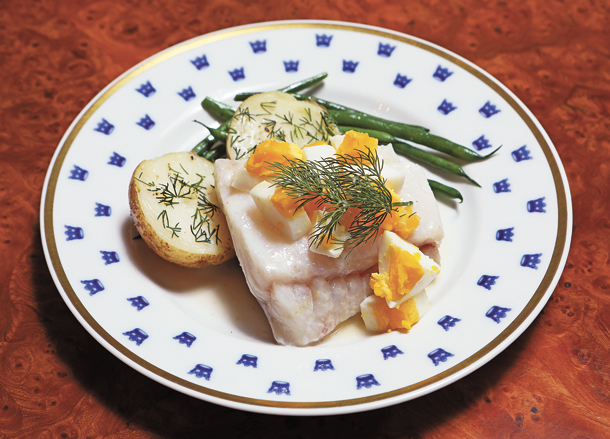 3. Brown 100 grams (3.5 ounces) of butter. Add some dill and 4 tablespoons of grated horseradish.

4. Boil water with salt and lemon and add the fish. Simmer for a few minutes.

5. Serve the fish with the eggs, potatoes, green beans, and the horseradish and dill butter sauce. 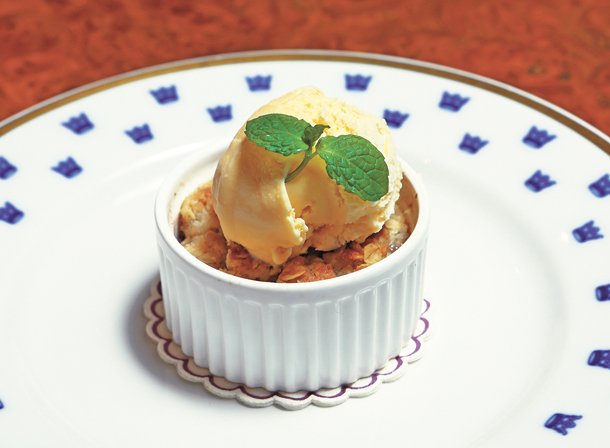 3. Cut four apples into thin slices and mix them with a 3 tablespoons of sugar and 1 teaspoon of cinnamon in an oven-proof dish. In this recipe we used six oven-proof dishes of around 4 inches in diameter.

4. Put the flour mixture on top of the apple cinnamon mixture.