Mexico brings its Day of the Dead to Seoul

Mexico brings its Day of the Dead to Seoul 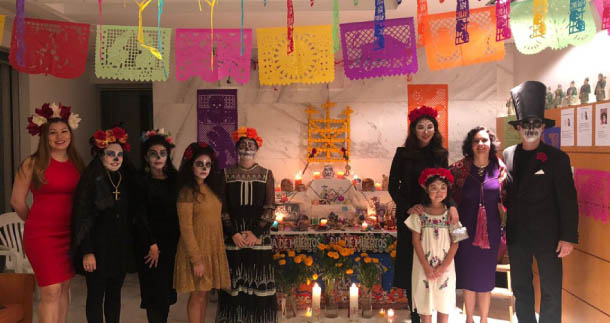 Members of the Mexican community in Korea and Korean guests with Veronica Gonzalez-Laporte, second from right, wife of Mexican ambassador to Korea, commemorate the Day of the Dead at the diplomatic residence in central Seoul on Saturday. [ESTHER CHUNG]

Painted skulls, marigolds, salt and pan de muerto, or bread of the dead, were just some of the unusual items that adorned the Day of the Dead altar at the Mexican diplomatic residence in central Seoul on Saturday, along with photographs of loved ones who had passed and some bottles of their favorite alcohol.

While most of these objects were foreign to the Koreans who visited the altar, one black and white group photo with a huge flag of their country in the background stood out.

“It is an old picture of the first Koreans who migrated to Mexico in 1905,” said Bruno Figueroa, ambassador of Mexico to Korea, in addressing the dozens of guests who gathered for the Day of the Dead commemoration at his residence. “There were a little more than 1,000 Koreans, full families at the time, who migrated to the Yucatan Peninsula to work in henequen haciendas [plantations].”

Henequen is a type of cactus that can be processed to make fiber products.

“There are now thousands of their descendants living in Mexico,” Figueroa said. “We wanted to remember the first Koreans who came.”

The Day of the Dead is celebrated for a few days from Nov. 1 every year in Mexico and by Mexican communities around the world. The proper way to do it, some Mexicans gathered at the residence said, was to spend the night at the cemetery.

“We have a very joyful relationship with this occasion, it’s not really a sad occasion,” said Veronica Gonzalez-Laporte, wife of the ambassador and an anthropologist who recently published a book about myths and legends of Korea, “Leyendas coreanas de Xico” (2019). “In the cemeteries, you will see people visiting with their families and talking to their loved ones who passed before them. It’s the Mexican way.”

“During these days, you will find in small villages paths made with petals of cempasuchil [marigolds] from the doors of the houses to the cemetery,” said Figueroa.

“After praying at home, everyone goes to the cemetery and sometimes people bring guitars or hire a mariachi band, bring food and drinks and they pass one night, Nov. 1, in the cemetery. That is the way we remember being close to our loved ones.”

Gathered at the residence on Saturday evening were a number of diplomats and ambassadors.

“Another thing we do in Mexico during the occasion is write funny poems about those who live on - families, politicians, famous people - and regarding death,” Figueroa said. “I have written a couple and one concerns the latest meeting among ambassadors and President Moon Jae-in.”

President Moon invited more than 110 foreign ambassadors serving in Korea to a reception at the Blue House on Oct. 18.

The following is the poem, “Diplomatic Corps(e),” written by Figueroa.

“When the diplomatic corps to the Blue House was invited,

Those Ambassadors who speak more than five minutes with president Moon,

Will be sent as punishment to hell very soon!

Alas, there is not a single ambassador in Korea today,

in the underworld they are all in disarray.

But there Ambassadors still suffer of verbal incontinence,

Product of years of cultivated impertinence!”