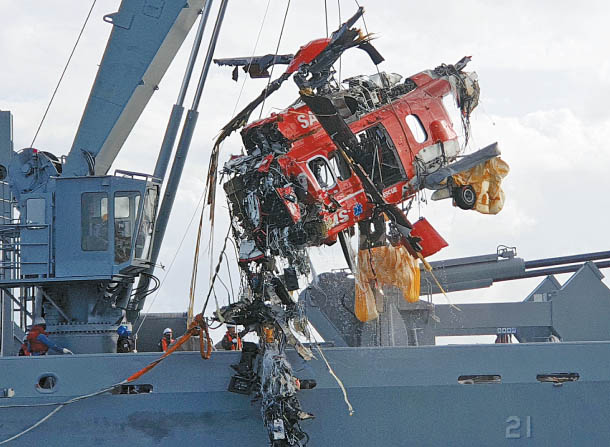 The Navy’s Cheonghaejin-class submarine rescue ship salvages the helicopter fuselage from the sea on Sunday. [YONHAP]

Korea’s Coast Guard on Saturday recovered the bodies of two passengers of the seven who are presumed to have been killed in a fatal helicopter crash near the Dokdo islets on Thursday.

According to the Coast Guard and National Fire Agency, two bodies were identified as males, with at least one of them believed to be a rescue official based on the color of his clothing. Emergency responders at Ulleung Island who examined the bodies said they were so damaged as a result of the crash that they were unable to properly identify them.

The recovered bodies have since been transported to a hospital in Daegu, where they were identified through DNA analysis and the family members of the deceased were informed.

The helicopter in question was an emergency responder EC-225 chopper that was ferrying an injured fisherman from a helipad on Dokdo before it crashed somewhere around 200 to 300 meters (656 to 984 feet) from the islets about 11:26 p.m. on Thursday. A total of seven people were accounted to be on board the aircraft - five emergency personnel in addition to the patient and a caretaker.

A large search party consisting of 13 Coast Guard vessels, five aircraft as well as dozens of divers was immediately mounted to find the helicopter and victims, but unfavorable weather conditions delayed the search.

Coast Guard divers on Friday eventually discovered the crashed chopper some 72 meters underwater at a distance of around 600 meters from the Dokdo islets. On Saturday, a Coast Guard spokesperson said three bodies had been discovered, two of which were found 110 meters and 150 meters adrift of the crash site. The third body was said to be found inside the aircraft’s fuselage underwater.

But when the Navy’s Cheonghaejin-class submarine rescue ship lifted the helicopter fuselage from the sea on Sunday, which the search party’s chief in a press briefing said was a necessary measure due to a storm forecast that day, no body was found.

It is unknown what caused authorities to misidentify the contents of the sunken chopper, but the Coast Guard said it would continue to mount an extensive search of the premises to find the other victims. Dozens of vessels and aircraft continue to sweep a distance of 54 kilometers south of Dokdo in the operation.

The cause behind the crash of the EC-225 helicopter, made by the European aerospace company Airbus, remains unknown. According to Coast Guard officials, the aircraft arrived in Dokdo to transport a fisherman who lost one of his fingers in an accident to the mainland, but crashed only two to three minutes after it lifted off from the helipad on one of the islets.

Mechanical failure has been cited as one possible cause. A month after the EC-225 in question, nicknamed the Yeongnam-1, was first introduced to the National 119 Rescue Headquarters in March 2016, a helicopter of the same type crashed off Norway in an accident that killed 13 North Sea oil workers.

Norwegian authorities later identified the accident to be the result of metal fatigue in the helicopter’s gearbox, which may have deprived the aircraft’s rotor from gaining enough strength to keep the chopper in air. The incident also prompted Korea to replace several pieces of equipment on its domestically-built chopper KUH-1 Surion, which is adapted from the EC-225 and shares many of the same parts as it.

After news of Thursday’s crash broke, President Moon Jae-in additionally ordered a comprehensive inspection of the safety of all choppers of the same type. Measuring 19.5 meters long, 4.97 meters tall and 4.1 meters wide, the EC-225 is capable of carrying up to 28 passengers and can travel up to 926 kilometers. The fuselage of the helicopter lifted out of the water on Sunday was heavily damaged, with its tail section, flight deck and rotor blades broken off. One National Fire Agency official said the aircraft appeared to have hit the water while its propeller was in full motion, which led to the fuselage breaking apart in the process.

While it is not yet known as of press time whether the chopper’s flight recorder - also known by the misnomer black box - has been recovered from the fuselage, both experts and officials say it may be impossible to fully understand the accident without obtaining the data contained within the machine.