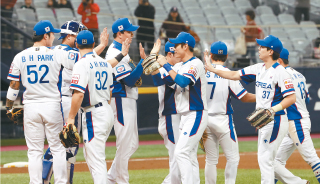 The Korean national baseball team celebrates after winning a tuneup game against Puerto Rico at Gocheok Sky Dome in western Seoul on Friday.[YONHAP]

From Wednesday to Friday, Korea will host Australia, Canada and Cuba in Group C play at the Premier12, a World Baseball Softball Confederation (WBSC) tournament doubling as a qualifying event for the 2020 Tokyo Olympics.

The Premier12 features the top 12 teams by the WBSC rankings, divided into three groups of four. Korea, the inaugural Premier12 champion from 2015, is also the top-ranked team in Group C at No. 3, followed by Cuba (No. 5), Australia (No. 7) and Canada (No. 10). The top two teams from each group will qualify for the Super Round, which will be played in Japan next week.

All Group C games will be played at Gocheok Sky Dome in western Seoul. Korea’s first game is against Australia on Wednesday, followed by Canada on Thursday and then Cuba on Friday. All Korean games start at 7 p.m.

To qualify for Tokyo 2020, Korea must reach the Super Round and also finish ahead of its Asia/Oceania rivals, Australia and Chinese Taipei.

Korea won the last Olympic baseball gold medal in 2008 in Beijing. The sport was dropped from the Olympics at the next two competitions, before making its way back in for 2020.

To recapture its glory, Korea brought back the manager from the 2008 Olympic team, Kim Kyung-moon. He has assembled a team of 28 former MVPs and All-Stars from the KBO.

Those on the 40-man rosters in the MLB aren’t eligible for the Premier12, and Korea won’t have the services of its three big leaguers - Choo Shin-soo of the Texas Rangers, Choi Ji-man of the Tampa Bay Rays and free agent pitcher Ryu Hyun-jin, the 2019 National League ERA champion who’s been with the Los Angeles Dodgers since 2013.

The following day, Korea got some offensive production from the bottom third of the order in a 5-0 win. All-Star outfielder Min Byung-hun, batting ninth, went 2-for-3 with a home run and two RBIs.

While those two wins should be taken with a grain of salt, coming as they did against a jet-lagged team who hadn’t practiced much, manager Kim still liked what he saw from both the pitching staff and the lineup.

The real test will come first against Australia on Wednesday, though that team will be without a couple of pitchers with some knowledge of KBO hitters.

Australia initially selected right-hander Warwick Saupold, who pitched the 2019 season in the KBO, but the pitcher pulled out in late October. Left-hander Travis Blackley, who spent the 2011 season in the KBO, was also cut from the original roster because of an injury sustained during training camp.

Brock Dykxhoorn, who split his 2019 season with two KBO clubs, will join Richmond on the Canadian staff.

Headlining the Cuban roster will be third baseman Yurisbel Gracial, who won the 2019 Japan Series MVP award for the Fukuoka SoftBank Hawks.

Gracial is one of three Hawks on the Cuban national team: outfielder Alfredo Despaigne and left-hander Livan Moinelo are the others.

Gracial launched three home runs in the Hawks’ four-game sweep of the Yomiuri Giants and had six dingers in 11 postseason games. Despaigne drove in three runs in a 6-2 victory in Game 3 of the Japan Series, and Moinelo, a setup man, threw 3 1/3 scoreless innings in three games in the Japan Series.