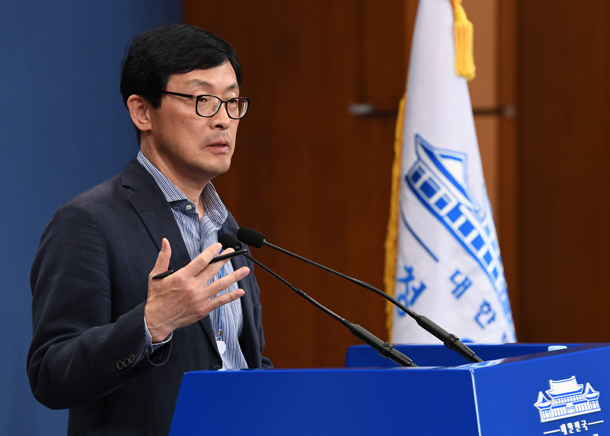 Lee Ho-seung, the senior Blue House secretary for economic affairs, briefs the press about Korea’s economic situation in the Blue House last month. Appearing in the National Assembly on Nov. 1, he did not answer when an opposition lawmaker asked about the economic growth prospect for this year. [JOINT PRESS CORPS]

Pygmalion was a king and sculptor in Greek mythology who carved a perfect, beautiful woman and named it Galatea. He fell in love with the sculpture and prayed that he would marry someone like the statue. Aphrodite was impressed by his love and gave her breath to him. The Pygmalion effect refers to a kind of self-fulling prophecy, where things go well if you believe they will go well.

Sociologist Thomas Merton used the term “self-fulfilling prophecy” when explaining the social dynamic of groups. He used the example of the bankruptcy of a bank. One day, an unusually large number of customers visit a healthy local bank, and one customer who notices the crowd takes money out because he is anxious there could be a problem with the bank’s financial status. A rumor goes around that the bank can go bankrupt, and in the end, the bank does goes bankrupt.

Senior Blue House secretary for economic affairs Lee Ho-seung is concerned about the negative impact of such self-fulfilling prophecies. In a briefing on the economy on Oct. 13, he said that if negative factors were repeatedly pointed out and bad impressions were given on the economy, people would not spend or invest, and in the end the economy would actually worsen. On the media reporting on concerns about our economy, he said that it was irresponsible to talk about a crisis too much.

Lee’s concerns seem to be growing, as we should be careful what you wish for. At a National Assembly interpellation session on the government on Nov. 1, he did not answer when an opposition lawmaker asked about the economic growth prospect for this year. As the economic secretary for the president, there is no way that he did not know the most basic number for the economy.

He may have chosen to remain silent as he did not want to mention the forecast that the growth rate could be at the 1 percent level this year. After all, he may have had nothing to say as it could be the lowest growth rate since the oil shocks, the 1997-98 Asian currency crisis and the 2007-08 global financial meltdown.

The author is a head of the financial team of the JoongAng Ilbo.