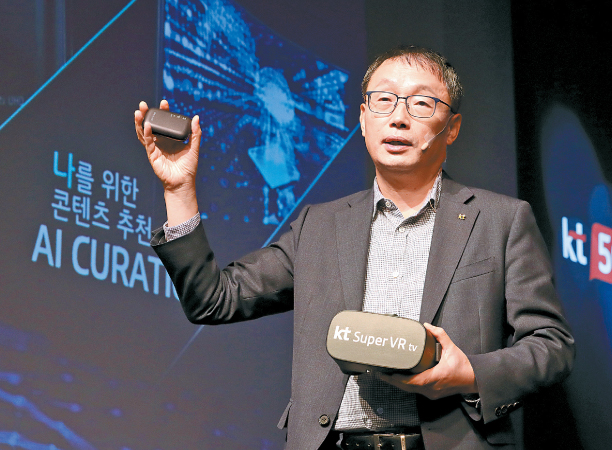 KT President of Customer and Media Koo Hyun-mo introduces the mobile carrier’s strategies for its internet protocol television (IPTV) business during a press conference held at the company’s headquarters in central Seoul on Monday. [KT]

KT is releasing a virtual reality (VR) head-mounted device that plays internet protocol television (IPTV) programs and a palm-sized set-top box to catch the trend in which TV watching is becoming more of a personal activity.

SK Telecom and LG U+ are attempting to merge with cable channels to meet the challenges. As a leading IPTV service provider, KT will continue its focus on developing IPTV programing in line with the trend.

“A growth opportunity for IPTV lies in personalization,” Koo Hyun-mo, KT president of customer and media, said during a press event held at the KT headquarters in central Seoul Monday.

He said single and two-person households already account for more than 50 percent of Korean households. Koo also pointed out that the TV-watching patterns today are no longer about families gathering in front of the TV altogether. Instead, people watch TV shows individually in their own rooms.

First is the VR head-mounted device, which will be offered as “Super VR TV.” The head gear will offer the image of a 180-inch-wide television screen that can be played like an IPTV at home. It has more than 210,000 movies, TV series and 270 broadcast and cable channels. KT developed software to minimize dizziness - common for VR devices - and to refine the edges of videos played on the device.

“We’ve been offering VR services for over a year - 80 percent of the time spent with VR head-mounted devices was for watching TV and the other 20 percent was for games,” said Koo, adding that a lower price tag set for its head-mounted devices will also lower the barrier for purchase. The device and the IPTV service are offered in a three-year plan costing a minimum of 9,900 won ($8.50) monthly.

A palm-sized set-top box was also introduced Monday. Compared to its existing models, the new version weighs one-fifth of them and consumes less electricity. The box is also wireless - which is why Koo said he expects the product to appeal to single and two-person households that often live in smaller homes.

Another feature was AI curation. IPTVs already offer recommendation functions based on a user’s viewing records. But KT’s AI curation suggests a different set of recommended shows and videos according to different family members. Users can create up to four accounts - one for the entire family and three family members.

“A lot of IPTV platforms analyze video-playing records for recommendation. But according to our analysis, only 10 percent of IPTV viewing is video,” said Song Jae-ho, a senior executive who leads KT’s media platform business.