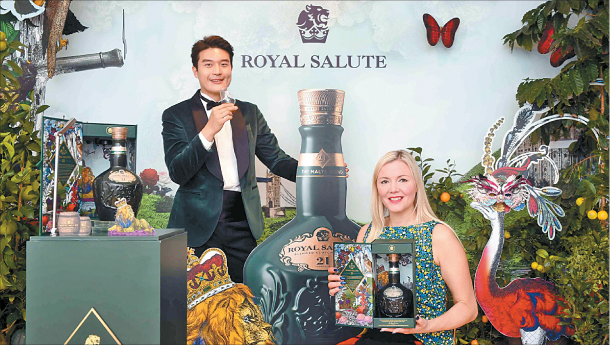 Royal Salute is holding art exhibitions in Seoul to connect with young, discerning customers for its Scotch whisky.

The Pernod Ricard-owned brand made the announcement Monday.

It noted that the exhibition is also a celebration of the addition of new whisky to its 21 Year Old range, rolled out globally in July.

Pernod Ricard introduced the whiskys to Royal Salute’s signature 21 Year Old range. This includes Malts Blend, which is its first ever blended malt. The packaging is by Icelandic artist Kristjana S Williams and includes depictions of the British Royal Menagerie.

Exhibitions feature artworks of Williams. Starting today, they will be held for two weeks at Banyan Tree Club & Spa Seoul in central Seoul and Gallery Planet in Apgujeong-dong, southern Seoul.

“Millennials heavily weigh psychological satisfaction,” said Kerrie Kim, malt & luxury brand director at a press event held in Banyan Tree Club & Spa Seoul on Monday. “They shop based on the knowledge they gain through research, and they stress experience and sharing that experience.”

Sales of foreign Scotch whisky in Korea jumped 6.6 percent on year in September, which was led by premium-blend whisky that is at least 21 years in age, according to Pernod Ricard Korea.

“Royal Salute is the only whisky that has a lineup that starts at 21,” said Pernod Ricard Korea marketing director Florent Leroi at the press event. “Most of them start at 10 years old and end at 21 years old.”