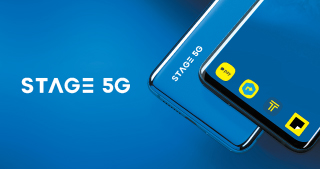 Stage Five, a local phone and Internet of Things equipment company, released a 5G smartphone on Monday that comes with a whole suite of Kakao apps already downloaded and ready to go.

The preinstalled apps don’t come as a huge surprise as Kakao’s venture capital arm Kakao Investment has invested in Stage Five, which was also behind the Kakao Kids Phone.

Named Stage 5G, the phone went on sale on both Naver’s and Kakao’s e-commerce platforms on Monday.

The handset was made by Chinese manufacturer ZTE. Outside Korea, the model is sold as the Axon 10 Pro 5G. An Android phone, the device is equipped with Qualcomm’s Snapdragon 855 for 5G connection and three cameras that offer up to 48-megapixel photos.

Stage 5G has Kakao T, Kakao Pay, Kakao Page and Kakao Games pre-downloaded as part of its basic settings. Users can also change settings so that Kakao apps can appear on the lock screen. Stage Five also collaborated with local company Infomark to import the device and optimize it to the local 5G networks.

Stage Five is a mobile virtual network operator (MVNO) that resells wireless devices at a low price by collaborating with mobile carriers instead of owning its own network equipment. Stage 5G is its first 5G-connected device.

Meanwhile, a Kakao spokesman said that Stage Five’s 5G phone release is not directly connected to its business and does not imply it is venturing into telecommunications devices, saying that Stage Five was just “one of the companies invested by its venture capital firm.”

Although Kakao says the phone has nothing to do with its business, a spokesperson did confirm that Stage Five is an affiliate and its performance results are included in Kakao’s results.