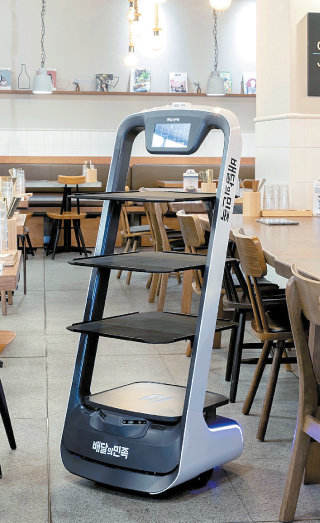 The robots will deliver orders to the tables in the dining areas, carrying up to 50 kilograms (110.2 pounds). Resembling a stepladder, Dilly comes with four shelves, which means it can serve four tables per trip.

It can move for 24 hours on a single charge.

The robot uses a 3-D camera and sensors to control its movement and is capable of automatically stopping and avoiding obstacles and people.

Baedal Minjok has run a trial service using the serving robot, but this time marks the first commercial use.

The robot can be seen at “Merry Go Kitchen” in Songpa District, southern Seoul.

Merry Go Kitchen is a prototype “future restaurant” developed by Woowa Brothers, the operator of the Baedal Minjok.

Opened July 23, the restaurant brings together food-related technology Woowa has accumulated, from robot servers to software.

Dilly also has a special Dilly Plate variation, which is specifically designed for serving pizzas.

“The serving robots developed by Woowa Brothers are designed to maximize efficiency at restaurants,” said Kim Joseph, head of robot delivery cell at the company.

“[Woowa Brothers] will keep trying to push forward the commercialization of serving robots, helped by the partnership with Pulmuone Food & Culture.”

Baedal Minjok has been active in robotics since last year and is aiming to develop robots that deliver food directly to the homes of customers.

It claims success in testing the operation of outdoor food delivery robots.