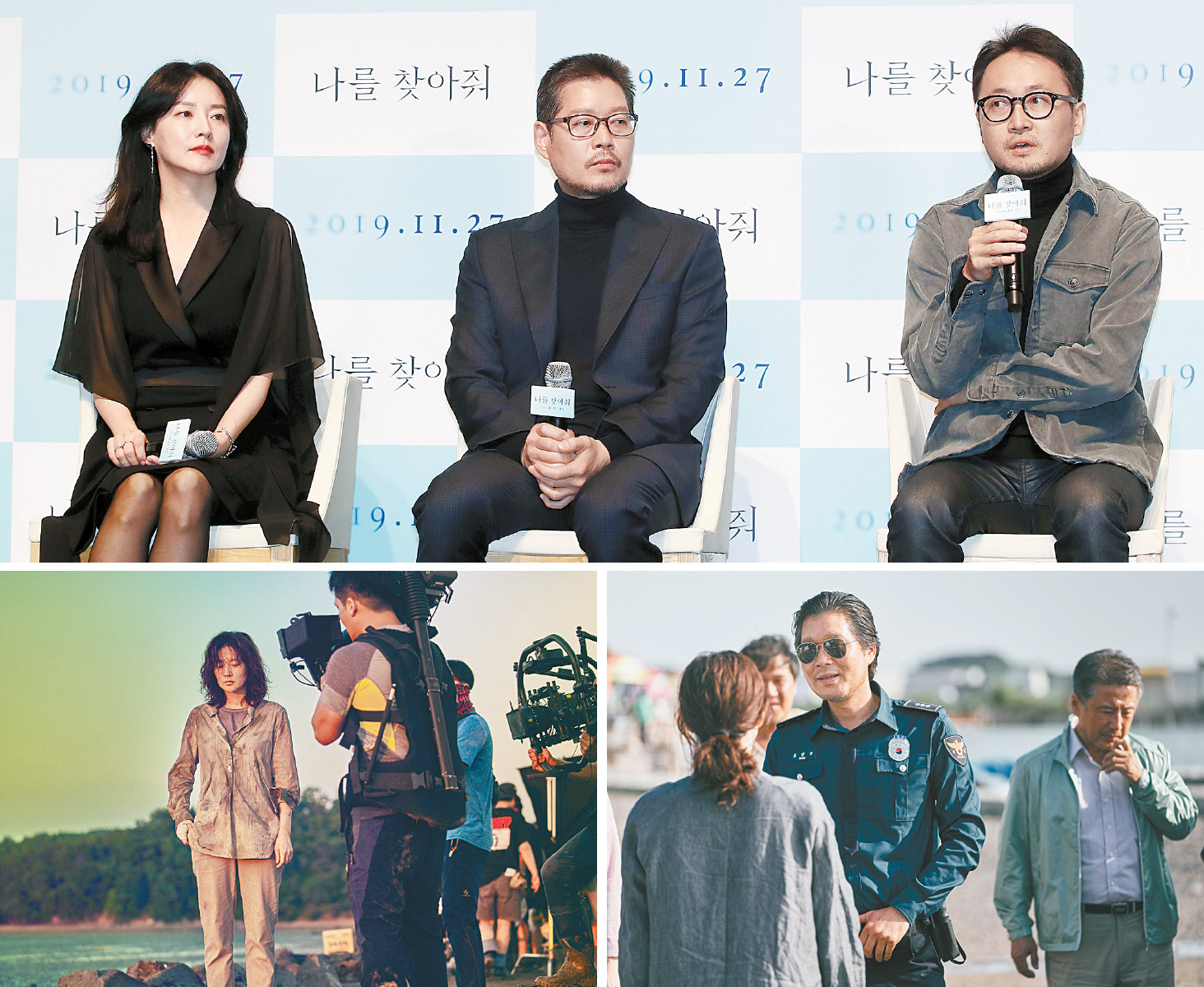 Top, from left, actors Lee Young-ae and Yoo Jae-myung and director Kim Seung-woo speak at the press conference of the upcoming film “Bring Me Home.” Above, behind-the-scenes footage of the film. Left, a disheveled Lee as Jung-yeon is looking for her missing son. At right, Yoo is sergeant Hong, who keeps his small seaside town in order. [YONHAP, WARNER BROTHERS PICTURES]

The star of “Sympathy For Lady Vengeance” (2005) is back on screens after a 14-year-hiatus, but this time Lee Young-ae isn’t striving for vengeance, she’s striving to find her child who has been missing for six years.

In her return, Lee plays a desperate mother with steely determination in the upcoming film “Bring Me Home.”

The film already generated quite a buzz when it was invited in the Discovery section of the 44th Toronto International Film Festival, but it was moreover due to the fact that it stars Lee, after her over-a-decade-long break.

The public has caught glimpses of her face now and then at a few celebrity events, variety shows and most recently in the SBS drama series “The Herstory” in 2017.

The fact that her last film, “Sympathy for Lady Vengeance,” before she took her 14-year break was one of the most resonating films from director Park Chan-wook’s and became Lee’s most iconic role has also added to the anticipation for “Bring Me Home.”

Although Lee’s character is also a mother with fierce love for her child, the similarities end there, the actor said at a press conference for the film at southern Seoul on Monday.

“In [‘Sympathy for Lady Vengeance’], the director’s color and the genre of the film were very distinct,” Lee said. “But in ‘Bring Me Home,’ the more realistic side of maternal love brims from the character Jung-yeon. I feel like that love was amplified [compared to the last film] because I have been a mother to two children myself for the last seven to eight years.”

While Lee emphasized the importance of following the journey of her character Jung-yeon, she assured that the audience would find it equally entertaining to watch the various aspects and personalities of the villagers, where Jung-yeon hears that her child was reported to have been seen.

Actor Yoo Jae-myung agreed with Lee as he introduced his character. “Sergeant Hong is [in many ways] a mundane head of the police department in the small seaside village,” Yoo said. “But he has his own rules, order of ways and power which he upholds more than anything [in his life]. The village is like his own playground that he roams, and he instantly throws up his guard when a stranger [Jung-yeon] intrudes on it. Hong will do everything within his power to resolve the crisis [and return to the orderly ways of life that he is determined to keep].”

“Maternal love is of course an important factor in the film,” Yoo continued. “But the completion of the film itself ultimately lies in the various characters who clash while struggling to find the truth. I’ve tried my best to portray that message.”

The film is director Kim Seung-woo’s debut feature film, and he defines himself as the luckiest director of the year to have such a perfect cast and staff to work with.

“For me, Lee herself was a fantasy,” Kim said. “She hasn’t been on a feature film for a long time, and I didn’t dare to hope for the best, but she courageously put faith in me.”

The director elaborated on his experience working with the actor.

“All the scenes I worked with Lee on were impressive,” he said. “But the turning point for me was when we did our first test scene together. I was of course pressured to do well as a rookie director, but as soon as I put Lee in the camera frame, I realized that [all I had to do] was to follow Lee and the film would turn out well. She actually changes the air inside the frame with her mere presence.”

But things were not all smooth sailing. Kim explained that the film setting, a seaside village, caused some issues.

“The main setting of the film is the sea and the marsh which led to many variables and setbacks,” he said. “But the actors and staff were unanimously in one mindset to do the best they could to film the scenes, which was why the film could be completed perfectly.”

Lee also said that because many of the staff, including special effects makeup artists and the art director, were the same as that of “Sympathy For Lady Vengeance,” she felt even more devoted to complete the film.

“It is a thriller but it’s also heart-warming,” Lee added. “I was drawn to the plot because of that. It’s also one of the main reasons why I chose to return to the screen with this film… Before marriage I focused on the role and the genre itself, but after I had my own children, I hope to positively influence the public with my dramas and films. ‘Bring Me Home’ correlated with my standards which I hope will affect the audience to look at the society that we’re living in.”

The film is slated to hit local theaters on Nov. 27.