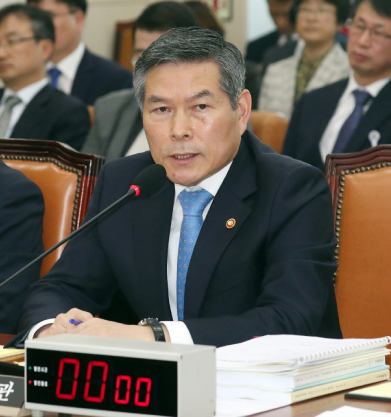 Defense Minister Jeong Kyeong-doo testifies in an audit into the Ministry of National Defense at the National Assembly on Monday. [NEWS1]

When asked about the North’s potential capacity to fire an ICBM from a transporter erector launcher (TEL) at a regular press briefing, the Defense Ministry’s deputy spokesman Roh Jae-cheon said the South Korean military would “prepare for even the 0.001 percent of possibilities,” adding the North had “continued efforts to build up military technology” since testing the Hwasong-15 ICBM using a TEL in 2017.

A TEL is a vehicle that can carry and launch one or more missiles, possessing the mobility that makes it less vulnerable to deterrence attacks by the enemy relative to fixed launch sites. North Korea’s short-range ballistic missiles that it tested on multiple occasions since May this year almost always were carried out from TELs.

While not a clear clarification of the ministry’s valuation of North Korean missile capacities, Roh’s words appeared to contrast the assessment laid out by the Blue House’s top security adviser, National Security Director Chung Eui-yong, who on Friday dismissed the North’s technical capacity to fire an ICBM from a TEL.

Kim You-geun, the Blue House National Security Office’s deputy chief and a former commander of the 8th Army Corps, also bolstered this claim, saying it was difficult to conclude “at the North’s present capacity” whether it may be able to fire an ICBM from a TEL rather than a fixed launch pad.

These remarks at a National Assembly audit at the Blue House just a day after Pyongyang’s most recent weapons test on Thursday generated heavy controversy as it directly belied an appraisal put out by the South’s Joint Chiefs of Staff last month.

In a parliamentary audit hearing on Oct. 8, Kim Young-hwan, chief of the Defense Intelligence Agency, said the North’s technology had advanced far enough to allow for an ICBM launch via a TEL, and that the North may convert its launch pad at Tongchang-ri to use for a different purpose.

Roh, however, appeared to step back from taking a side on these opposing viewpoints, saying regardless of whether the North uses a fixed launch pad or a TEL, the South would coordinate with the United States to “closely track and surveil the North Korean military’s activities pertaining [to missiles] in order to keep up perfect military preparedness.”

North Korea’s evolving missile capacity was also expected to be a major focus of the parliamentary audit for the country’s intelligence agency, the National Intelligence Service, which took place behind closed doors on Monday.

In a separate audit session for the Defense Ministry on Monday, Defense Minister Jeong Kyeong-doo also commented on the ongoing controversy over Seoul’s planned withdrawal from the General Security of Military Information Agreement, or Gsomia, with Japan, which is expected to take place at the end of this month if South Korea chooses not to renew the pact.

In a seemingly contrarian position to the Blue House’s decision to end the pact as a result of Japan’s recent economic reprisals against South Korea, Jeong said “if [the pact] helps our national security, even a little, it should be maintained.” Stressing that he spoke about the importance of Gsomia in multiple earlier occasions, Jeong added however that Tokyo’s qualms over the security aspect of exports to South Korea should also be relieved if Gsomia is to be kept.