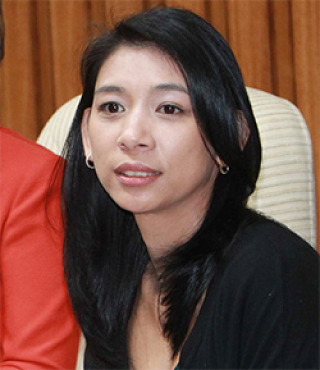 Jasmine Lee, 42, the Philippine-born naturalized Korean who served as a lawmaker for the Saenuri Party, the predecessor of the main opposition Liberty Korea Party (LKP), will join the Justice Party (JP) next Monday as the general election nears.

Rep. Sim Sang-jeung, chairwoman of the minor-left JP, said Monday during a party meeting that she personally met and persuaded Lee, who’s currently the chairperson of the Korea Cultural Diversity Organization, to join the JP.

In a recent telephone interview with the JoongAng Ilbo, a spokesperson for the JP said the party has yet to decide whether to offer any official role to Lee in the party, or whether she was planning to run in the next general election in April. The source continued that the party would think further about Lee’s possible role before she officially joins on Monday.

Another JP official told the paper there was “a high possibility” Lee would be given a role in the party because accepting her was like accepting “the representative of 2 million immigrants” in Korea.

Lee is known to have left the LKP in mid-October.

Lee’s election as a proportional representative in 2012 during the former conservative Park Geun-hye administration was seen as a symbol of Korea’s increasing multiethnic society - and how the National Assembly, after decades of ignoring the demographic transformation, was finally paying attention to the needs of immigrants trying to settle in a country that used to take pride in “ethnic homogeneity.”

Lee appeared a good fit for the Saenuri Party, which made several attempts to distance itself from its rigid, conservative image by changing its name from the Grand National Party and also swapping its official color from blue to red. Before joining the Saenuri Party, Lee gained popularity as the host of a TV show on EBS teaching basic Korean to immigrants.

But her popularity didn’t last in the National Assembly.

During her four-year term, Lee tried numerous times to pass laws helping immigrants and advocate for a multiethnic society in Korea, yet most of them were overlooked by her own party and only two bills were officially proposed - both of which ultimately failed.

In November 2013, when her native country was hit by Typhoon Haiyan, killing more than 6,000 people, Lee submitted a resolution to the National Assembly urging help for the Southeast Asian neighbor. The Korean government sent $5 million, and the National Assembly deducted 100,000 won ($86) from lawmakers’ paychecks to form a separate fund. But when the Philippine government later produced a thank you poster for donating countries, Korea was not included, and Lee was criticized for embarrassing Korea.

Some people criticized Lee in 2014 and 2015 for not championing the plights of Koreans killed in the Philippines.