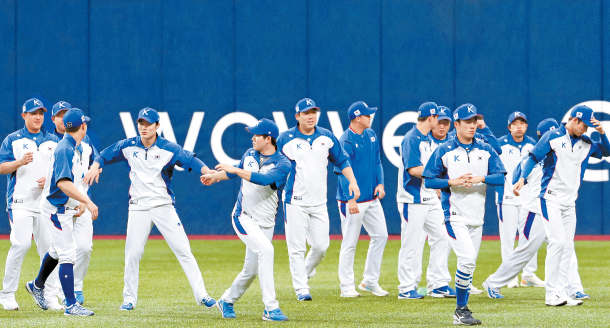 The Korean national baseball team trains at Gocheok Sky Dome in western Seoul on Monday, ahead of the Premier12 baseball tournament. [YONHAP]

Korea will play three games back-to-back, facing the seventh-ranked Australia today with Yang Hyeon-jong starting, 10th-ranked Canada on Thursday and fifth-ranked Cuba on Friday. All Group C games will be played at Gocheok Sky Dome in western Seoul, and all of Korea’s games will start at 7 p.m.

The quadrennial event is an international tournament and only the top 12 countries in the WBSC World Rankings as of December 2018 get to participate. As the 2020 Tokyo Olympics is fast approaching, this year’s Premier12 also serves as a qualifier for the Games.

Looking at the format of the Premier12, the teams are divided into three groups of four. The group stage is held in a round robin format, with the top two teams from each group advancing to the Super Round. Once again, the six teams that advance to the Super Round will play another round robin format to determine the four teams advancing to the finals.

Each team will play four games in the Super Round, as they will not play a second game against the other team to advance from their group.

While the group stage games are hosted in three different countries - Mexico, Taiwan and Korea - the Super Round and finals will be held in Japan.

Before the start of the tournament, Korea prepared for the international event through two tune-up games against Puerto Rico, assigned to Group B. Korea’s pitchers managed to toss 18 scoreless innings to win the two games 4-0 and 5-0.

Unlike the three other countries, which have to adjust to the new stadium, Korea has a huge advantage in the group stage as host. Since the Kiwoom Heroes use the Gocheok Sky Dome as their home stadium, the players are already well-adjusted to the environment at Gocheok, including its artificial grass surface.

Although they have the home advantage, the KBO players may struggle with a different strike zone and ball than they are used to.

The biggest difference is the wider strike zone. Although the tune-up games used KBO umpires, they still said that there was a clear difference in the strike zone. As it was just a tune-up game, the players didn’t complain about the zone but things could change once the group games actually start.

“The strike zone in international tournaments is definitely wider,” said catcher Yang Eui-ji. “We’ll have to use that wisely.”

While this could make the game a little more difficult for the batters, for pitchers, this can be a good thing. The KBO’s strike zone tends to be narrower than other leagues. But for pitchers like Yang and Cha Woo-chan, who have great corner work, the strike zone may now be too wide.

That said, they still tossed two scoreless innings during a tune-up game on Nov. 1.

There was a clear difference visible in the tune-up games. The Doosan Bears’ clean-up hitter Kim Jae-hwan hit a two-run home run on Nov. 1. He hit it as far as 125 meters (410 feet), hitting the upper half of the wall in the outfield.

“I didn’t get to hit a lot [of it] yet, but this baseball [for Premier12] feels like it’s going further,” Kim said.

“[Since batting training,] the hits that didn’t feel like they would go over ended up being home runs,” Min said. “It probably won’t be a big difference, but I think it is flying further [than the KBO baseballs].”

Throughout the 2018 season, the KBO had a record year in terms of home runs as there were 35 batters that hit 20 home runs or more. At the time, the KBO’s baseballs had a higher restitution coefficient, which ranged between 0.4134 to 0.4374.

Throughout the 2019 season, only 11 batters hit 20 home runs or more. A higher restitution coefficient is expected to increase the Korean hitters’ ability to hit more home runs at the Premier12.