The powers of an art museum as a gathering place: Park Chan-kyong pushes against the authority of curators

The powers of an art museum as a gathering place: Park Chan-kyong pushes against the authority of curators

The main part of Park Chan-kyong’s exhibition features “Water Mark” - 16 concrete panels with sea-wave patterns, and folding screens in the back, like a living room where people gather and talk. [MMCA]

In a post-apocalyptic world where society and politics no longer look like they once did, what would people gather together for?

Multimedia artist Park Chan-kyong doesn’t have a clear answer, but he invites you to participate in the thought experiment at his first solo exhibition at the Museum of Modern and Contemporary Art (MMCA) Seoul. Park has been chosen as the sixth artist to participate in the MMCA Hyundai Motor Series, a 10-year joint project by the MMCA and Hyundai Motors where a prominent artist is chosen to hold a solo exhibition at the museum, sponsored by the automobile maker. It started in 2014 with Lee Bul, followed by Ahn Kyu-chul, Kimsooja, Im Heung-soon and Choi Jeong-hwa.

Artist, director and also a critic, Park’s exhibition follows a cinematic story referred to as a “narrative of frame” in literature and film. Although the core of the exhibition is about the meaning of gathering, Park focuses specifically on the act of gathering at an art museum. 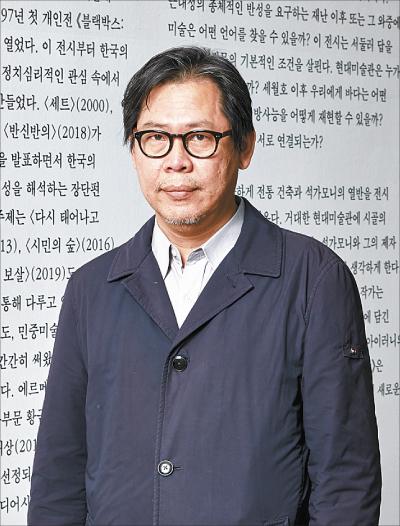 Park Chan-kyong was chosen as the sixth artist to participate in the MMCA Hyundai Motor Series. [MMCA]

The first section of the museum is titled “Small Museum of Art,” where works from other artists curated by Park are displayed. Most works resemble Buddhist art, creating a temple-like mood that’s related to what visitors will see in the coming sections. The descriptions of works on the walls are written by Park himself, making it clear that a museum is the work of curation by a certain individual. It’s a “small rebellion to the social institution” and a suggestion that art should be digested by the people who encounter it.

“You see certain artworks displayed in certain ways at museums,” said Lim Dae-geun, the curator of the exhibition. “But Park asks, aren’t museums just another institution forced onto us? Isn’t it just the authorities of scholars and researchers saying that this is the convention and this is what you should be seeing at a museum? So at this exhibition, you start the experience, consciously aware of the fact that you’re entering an exhibition and a narrative that’s been set out by someone.”

The exhibit then leads to Park’s new works, including “Fukushima, Autoradiography,” a video work visually presenting the damage caused by the Fukushima nuclear disaster in collaboration with Masamichi Kagaya Mori Satoshi. The 55-minute film “Belated Bosal” is filmed in a black and white negative, pairing Siddhartha Gautama’s nirvana with the Fukushima nuclear disaster in an unlikely mash-up, creating an eerie visual experience. 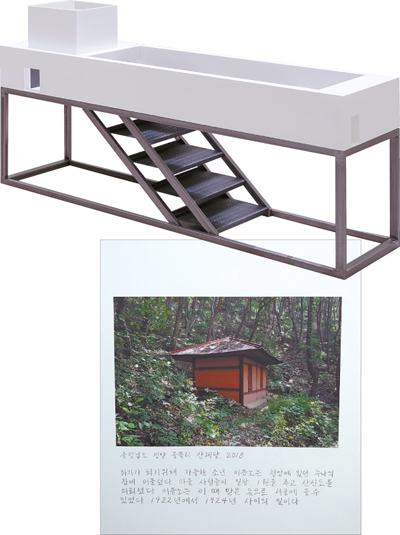 The exhibition closes with a miniature model of the museum, top, to close the narrative of frame. Park Chan-kyong wrote all the descriptions himself with pencil, right, making it more personal. [MMCA, YOON SO-YEON]

At the main exhibit space, “Water Mark,” visitors can sit on the wooden benches and ponder Park’s messages while looking at concrete panels covered with sea wave patterns. The Korean title of the section, “Haein,” is a Buddhist word that means every object and life is marked in the sea like stamps, but it is used in an ironic sense in the work, where sea waves, flowing and dynamic, are marked onto concrete panels, dead and solid, reflecting how people are often stuck in reality when they would like to change.

The exhibit closes with the “Gallery 5” section, in which a miniature model of the museum sits in an empty room.

“It zooms you out of the exhibition that you’ve just been looking at,” said Park. “It takes you far away from where you are and makes you see yourself again in a different light […] It doesn’t really have the common flow of an exhibition, but it’s up to the audience to find the narrative within the plot, and to rethink the museum as a frame of thought.”