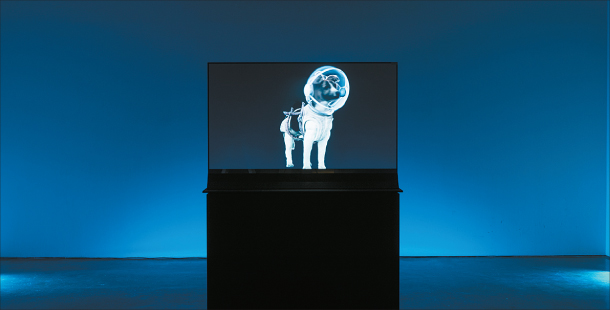 Video artist Kim Se-jin’s latest solo exhibition at the SongEun ArtSpace titled “Walk in the Sun” sounds like it would be a relaxing experience. In fact, her messages are so strong that it will leave you thinking, with every step you take, about where you are and how the territories we take for granted become the main source of fights among people around the world.

For Kim, it’s all about land, more specifically, territories and borders created by humanity. There are only four video works, but their impacts are significant.

The first work, “Messenger(s)” is calm at its face, with just the image of a dog in a space suit shown on the screen. Nothing much happens. It’s just a dog named Laika, who was sent to space and never returned home. We study space and talk about how one day human beings will leave Earth to find another territory - but why?

“During the space war between America and Russia, Laika was sent to space and left there,” said Kim. “He was praised as a hero, but it shows how a life was sacrificed without our full awareness. My works seem to talk about a lot of different things, but at their essence, it’s about how people always try to look for the best condition for themselves. Movement - or immigration - is caused by both internal and external causes, but it’s ultimately about trying to find the best place to live.”

The piece “2048” (2019) was produced when Kim travelled to Antarctica and stayed with researchers.

“We think that the Antarctic is a neutral land, but it’s all about politics down there. The title ‘2048’ is a question to what would happen to the land, after the Antarctic Treaty System ends in 2048,” said Kim.