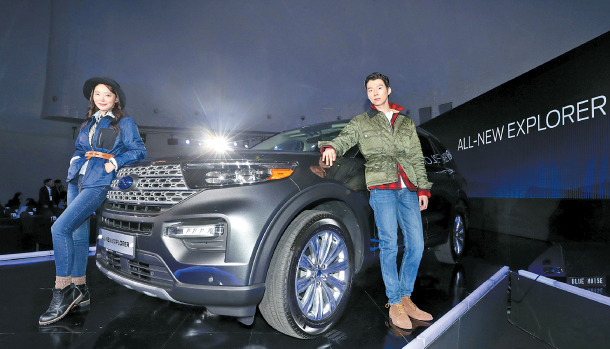 Models pose next to Ford’s Explorer during its launching event at the Sevit Islets in Gangnam District, southern Seoul, on Tuesday. [NEWS1]

The target consumer was clear - campers.

The U.S. automaker made its intention very clear in marketing its latest SUV to young families that are actively engaged in outdoor activities. The entrance to the venue that held the event at the Sevit Islets in Gangnam had a fake garage wall with tools like hammers, monkey wrenches and power drills hung on the side while a bicycle was placed on the side.

Ford Korea on Tuesday introduced its sixth-generation “all-new Explorer,” the first redesign since 2011.

The redesigned car arrived in Seoul after launching in Detroit in January. A hybrid version was introduced in Europe in April. 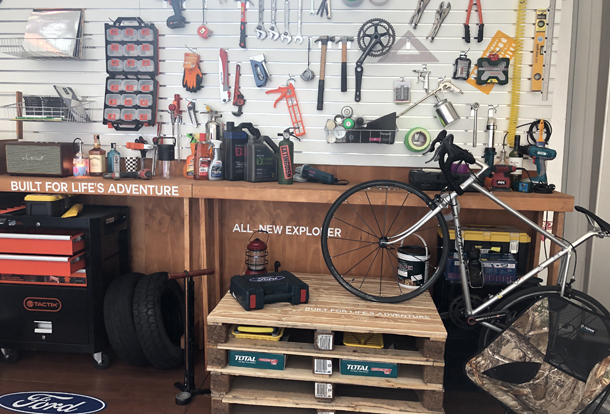 “SUV at some point has become a word that every consumer who’s considering buying a new car thinks of,” said Jae Jung, the CEO of Ford Korea. “[Recently] global SUV [sales] have seen a sharp rise, but so has competition. Under such circumstances, we have decided to go back to basics.”

“[The Ford Explorer] is equipped with a 10-speed gear that provides a more dynamic and precise driving ability and is installed with Ford’s Co-Pilot 360 Plus,” Jung said.

Co-Pilot 360 Plus is a system that allows the vehicle to detect objects that are in blind spots as the cameras on the vehicle allow the drivers to get a 360-degree view of all angles.

The car also has systems to prevent it from colliding into other vehicles or objects on congested roads as well as forward automatic emergency braking.

The reverse brake assist system allows the vehicle to automatically hit the breaks if it is about to collide with an object unnoticed by the driver.

Ford Korea is hoping that the SUV will boost its sales.

Despite the sales increase, Ford only accounts for 4 percent of imported vehicles in Korea.

Last month it sold 430 cars. That’s only 2 percent of the 20,813 imported vehicles sold in the same month. German cars continue to dominate the market.