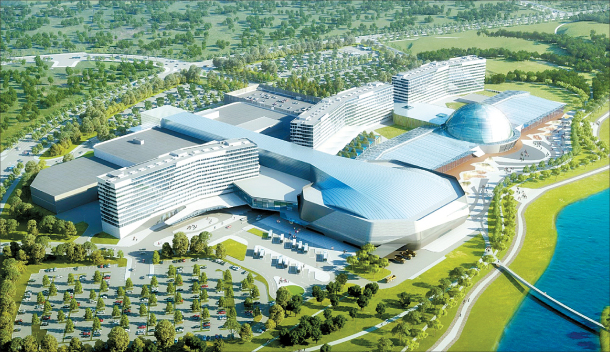 A bird’s-eye view of a new entertainment resort to be built nearby Incheon International Airport in 2022. [MGE]

Incheon International Airport Corporation said Tuesday that a massive entertainment resort with a hotel, an arena and a casino will open around the airport in June 2022, at the earliest.

Construction will be in four phases and completed by 2031, but Phase 1 will be completed by June 2022. Phase 1 construction is divided into two subphases, 1-A and 1-B. During Phase 1-A, due for completion by June 2022, the resort builder will spend 1.5 trillion won ($1.3 billion) to build a five-star hotel with 1,256 rooms, a 15,000-seater arena for performances, convention halls and a foreigner-only casino.

The Korean airport said construction began in May last year to complete the project as scheduled.

During Phase 1-B, a Paramount Picture-branded indoor theme park will be built for a 2025 opening.

Total investment will be 1.3 trillion won.

Phase 2 to Phase 4 are set to begin from June 2024, though no details have been set yet.

An outdoor Paramount-branded theme park is likely to be included in this development.

The airport said the new resort, when completed, will generate various economic ripple effects, including some 800,000 jobs both directly and indirectly, and spark 167 trillion won worth of production, under the assumption that the resort will be operated for some 30 years.

“Once the Inspire entertainment resort opens in 2022, we will be able to contribute to the national and regional economy by creating new jobs and attracting tourists with world-class entertainment facilities,” said Koo Bon-hwan, CEO of Incheon International Airport Corporation. “We will focus on building an economic bloc around Incheon Airport to make the airport a hub for air transport, tourism, logistics and high-tech industries.”

Inspire was selected the operator of the massive resort project by the Ministry of Culture, Sports and Tourism in 2016 and obtained approval for its business plan in November last year so it could start developing the Incheon area.

The Korean airport said it expects over 3 million additional foreign tourists to visit Incheon Airport once the resort opens in 2022.