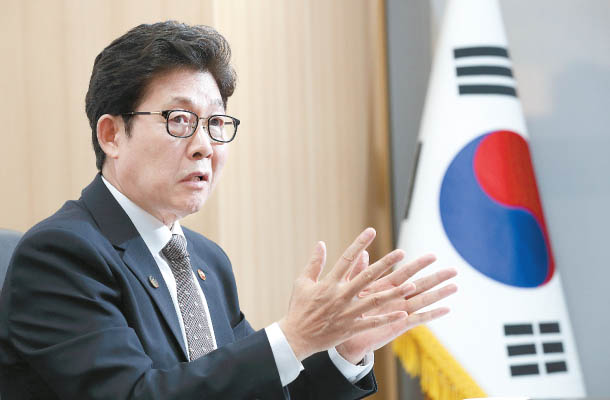 Environment Minister Cho Myung-rae has an interview with the JoongAng Ilbo and Korea JoongAng Daily in his Seoul office on Oct. 22. [LIM HYUN-DONG]

Environment Minister Cho Myung-rae stressed the importance of Korea joining in with global efforts to reach net-zero carbon emissions by 2050 as Seoul is set to host the Partnering for Green Growth and the Global Goals 2030 (P4G) summit next year.

During the United Nations Climate Action Summit last month, 65 countries committed to reach net-zero carbon emissions by 2050, and Cho, as he sat for an interview with the JoongAng Ilbo and Korea JoongAng Daily on Oct. 22, said, “As environment minister, I was disappointed that Korea couldn’t make such a declaration.”

However, he added he recently pushed for discussions to begin on Korea becoming a net-zero emissions society while discussing low-carbon strategy for 2050.

The P4G, a public-private initiative to tackle climate change and deliver on the United Nations’ Sustainable Development Goals (SDG), was launched in 2018 in Copenhagen, and Korea will host the second P4G summit next June.

Korea plans to cut its greenhouse gas emissions by 37 percent from business-as-usual (BAU) levels by 2030.

Cho, speaking at the Ministry of Environment’s Seoul office located in Seoul Square, also addressed government measures to combat fine dust particles in the air in the winter months.

“Between December and March next year, fine dust particle levels will be 15 to 20 percent higher than the annual average amount,” said Cho. “If the usual fine dust pollution is pre-emptively decreased in the winter and spring, we can to a certain extent lower the levels even if we are later hit by a high concentration.”

Cho, an environment expert who previously was a professor of urban and regional planning at Dankook University, said in order to reduce fine dust levels, “We plan to shut down as many as 27 coal-fired power stations in March when power demand decreases.”

This Saturday marks one year since Cho, who previously served as president of the Korea Environment Institute and headed the Council of the Heads of Environmental Research Institutions, was appointed to the post.

He addressed the myriad of environment-related issues Korea is currently facing and said, “The Environment Ministry is dealing with not only the fine dust problem but [also] faces a perfect storm situation with the waste disposal issue, the spread of African swine fever (ASF) by wild boars and avian influenza.”

Q. The level of fine dust particles between January and September this year seems to be higher than the same period the previous year.

A. Because of factors including meteorological conditions, there was an unparalleled high level of fine dust between January and March. In contrast, we had the lowest-ever level between April and June. High concentrations of fine dust particles can result from a decrease in wind speed due to climate change, along with atmospheric congestion.

What sort of measures are being undertaken as we again face the winter season which is usually accompanied by high fine dust levels?

Last spring, the National Assembly passed eight bills related to fine dust, and we are preparing for their implementation. By April next year, we plan to designate air pollution control zones and adopt caps [on the permissible emissions volume of air pollutants] to get businesses to reduce fine dust emissions by up to 40 percent. It is important to provide permanent measures to reduce key emissions sources such as providing eco-friendly vehicles. For the first time, an Environment Ministry-led budget bill to curb fine dust was approved, and through this project, domestic fine dust emissions can be decreased by 2 percent, or by 6,700 tons, annually. We also plan to crack down on businesses to eradicate illegal emissions.

What measures are there to deal with fine dust coming from abroad?

While there is clearly an improvement trend in China’s fine dust, it is also true that there is a loud call to bolster Korea-China cooperation. On Nov. 23 and 24, a Korea-China-Japan environmental ministers’ meeting will be held in Kitakyushu, Japan, where the report on the long-range transboundary air pollutants in Northeast Asia will be announced for the first time. Official documents on China’s impact will also be revealed. Through this meeting, we are also reviewing ways for the Northeast Asia region to request similar international agreements with Europe and North America.

As you have been a longtime activist for environmental issues, some say you only listen to environmental organizations and are bolstering regulations on companies.

The environmental cost of manufacturing products has to be internally calculated [by the company]. If air pollution prevention facilities are installed, this is not only good for the air, but if the regional environment is improved, the health of the consumers will also be improved. That is what corporate social responsibility (CSR) is about; there is a need for CSR for healthy consumers.

Korea will host the P4G conference next year, but there has been some criticism that the government’s policy on reducing greenhouse gas emissions is insufficient.

It has been 10 years since the Framework Act on Low Carbon Green Growth to reduce greenhouse gas emissions was enacted. While the target reduction level was low, the inspection system was also weak. That is why it is a priority to strengthen an implementation system. After 2014, there was a slight increase in emissions, but there was an overall trend of decrease, and the forecasted level for the latter half of this year is greatly reduced from the same period last year. As we continue to develop, we don’t know when the peak will be, so we set as our goal a reduction of a certain percentage of the BAU levels. In accordance to the Paris climate agreement, we will need to submit a Nationally Determined Contributions report next year on our target reduction level, and this time we plan to set an absolute quantity lower than the BAU level as the target. In a recent workshop on the 2050 low-carbon power generation strategy, I proposed to begin discussions on becoming a net-zero emissions society. During the United Nations Climate Action Summit on Oct. 23, 65 countries committed to reach net-zero emissions by 2050, and as environment minister, I was disappointed that Korea couldn’t make such a declaration.

The P4G has a “global goal,” and there is the concept of “green growth,” but what do you think of the Lee Myung-bak administration’s green growth policy?

I have criticized the Lee Myung-bak government’s environmental policy in my book “Green Constructionism and Environmental Crisis.” It’s a Jevons paradox, and the more the past government engaged in green growth, the more cost was incurred. A key example was the policy to provide 1 million homes powered with environmentally-friendly energy. Rather than promoting energy efficiency in existing homes, it was a policy to build new residences that are energy efficient. While the new homes may be energy efficient, building 1 million new homes consumes that much more energy. This in turn produces more greenhouse gas emissions. We cannot conduct that sort of green growth.

Though the National Water Management Committee will be in charge of the matter of dismantling some weirs of the four rivers restoration project of the Lee Myung-bak administration, does the Environment Ministry have a role as well?

If there is consensus amongst the people and no contradicting opinions, the weirs can be removed right away, but there is too much deviation in political interpretations. Under such a situation, any policy needs a little bit of breathing room. None of the experts I have met until now have a picture of a restored nature following the removal of the weirs. The removal of the weirs also requires legal basis. We have only constructed, and we do not have any regulations on the dismantling of river facilities. Some say that the Transport Ministry wouldn’t do things that way and would remove it immediately, but I ask, does the Environment Ministry have to work like the Transport Ministry? I do not see it that way.

That’s something I just heard for the first time. The two are completely unrelated. That I can 100 percent ascertain. The Environment Ministry’s decision [on whether to approve the Mount Seorak cable project] was a result of following procedures faithful to the task. There have been many political and nonpolitical discussions on the Mount Seorak cable project, but the review of the last proposal was thoroughly centered on experts. The neutral experts all concluded that it was “inadequate.”

There is concern that the expansion of solar and wind power can destroy the ecosystem.

This is a clash between green and green value, and there hasn’t been such concern until now. In order to cut greenhouse gas emissions, new renewable energy has to amount to at least 30 percent of overall energy, and this general trend cannot be stopped. It is the reality that dissemination of renewable energy can damage the environment, but that can be seen as a transitional period issue. Alleviating the conflict of the greens [such as addressing the conflict between green development to habitat preservation] is the biggest task for the Environment Ministry. This is not a matter of principle or theory, but it needs to be resolved in detail and in practice. Solar panels are generally installed in forest lands which has caused green-green conflict, and rather than in forest lands, they should be installed in existing development zones, key buildings in cities, idle land and parking lots.

What has been most memorable during the past year since you became environment minister?

As someone from academia, I wanted to translate the philosophy I had into policy in the bigger picture as I worked firsthand in policy making, but I felt it was important to do well on the issues I bumped into on a daily basis. You need to know the details thoroughly but also be good at coordinating interests. The two can go hand in hand but also contradict each other. I look at the longer breadth but also solve several problems on a daily basis. We are responding urgently in the case of ASF and hold several meetings a day on this. In the long run, I want to address policy issues that we were not able to until now and adopt mid- to long-term policies and new policies and change institutions, but I can’t help thinking things are not going as smoothly as I thought they would under the current system.