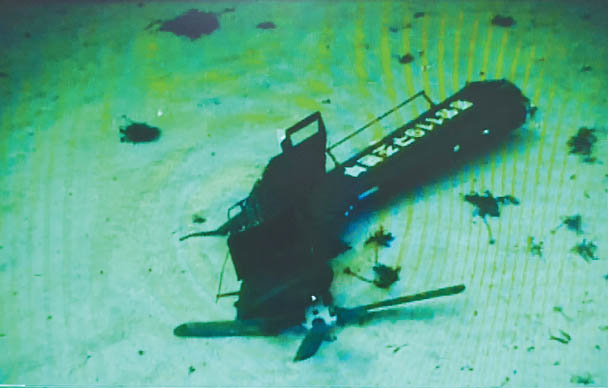 The tail part of the crashed helicopter on Tuesday was located by Navy divers on the seabed near Dokdo islets. The tail part is expected to contain a black box recorder that will unveil the cause of the crash. [NEWS1]

Rescue workers on Tuesday discovered another body believed to be one of the missing people who were on board an ambulance chopper that crashed into the East Sea five days ago, maritime police said.

According to the Korea Coast Guard East Regional Headquarters, a remotely-operated vehicle of the Navy’s submarine rescue ship Cheonghaejin located a body from the site of the chopper crash shortly after Monday midnight but unsuccessfully attempted to retrieve it due to unstable electronic signals.

The naval ship plans to resume its retrieval operation as soon as the signal glitches are repaired.

The ill-fated ambulance helicopter owned by the National 119 Rescue Headquarters was carrying seven people, including an injured person, when it crashed into the East Sea on Thursday night shortly after taking off from the easternmost islets of Dokdo. The rescue chopper was on a mission to save the patient from a fishing boat.

Over the weekend, rescue workers retrieved two bodies, identified as the copilot and chief mechanic, and the chopper’s fuselage from the waters.

Coast Guard officials speculate that the third body found is the one that was lost during Sunday’s fuselage salvage operation after being trapped inside the chopper.

They said a rescue team consisting of 20 Coast Guard and naval vessels, six aircraft and three drones will continue to search for other remaining missing people and plans to additionally salvage the chopper’s black box and tail parts, found at a location about 114 meters (374 feet) from the crash site, to help determine the cause of the crash.