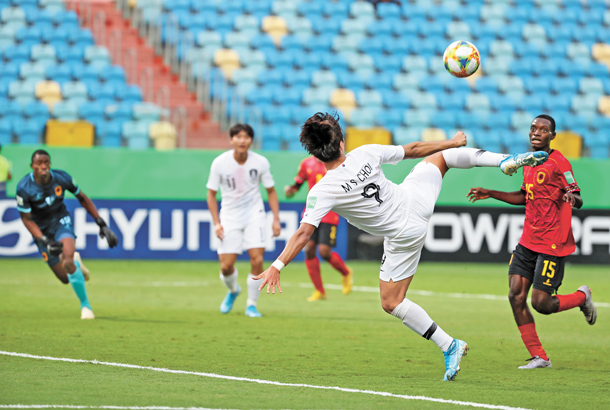 Choi Min-seo scores the only goal of the match during the round of 16 match against Angola at the FIFA U-17 World Cup at Estadio Olimpico in Goiania, Brazil on Tuesday. [YONHAP]

For the first time in 10 years, the Korean U-17 football team has advanced to the quarterfinals at the FIFA U-17 World Cup in Brazil.

Led by head coach Kim Jung-soo, Korea defeated Angola 1-0 in their round of 16 match at Estadio Olimpico in Goiania, Brazil on Tuesday. Choi Min-seo scored the only goal of the match in the 33rd minute to lead the young Taeguk Warriors to the next stage.

“When [Jeong] Sang-bin was shooting from the side, I was preparing for the rebound,” Choi said. “Then, when the ball that the goalkeeper blocked bounced into the air, I made an aggressive attempt to get the [volley] and that went in.”

But Choi wasn’t the only stand-out player on the Korean team. Lee Tae-seok fulfilled his role in marking Angola’s ace player Zito Luvumbo. Behind Lee’s successful defense, he said he tried to force Zito onto his right foot.

“It was tough,” Lee said after the match. “Right now [after the match] I’m really tired and I don’t want to do anything. Zito is fast. When I watched him in a clip, he was really threatening, but once I actually faced him, it was alright. Since he’s very good with his left foot, I defended him by leading him to the side so he would use his right foot more.”

The young Taeguk Warriors’ goalkeeper Shin Song-hoon, who is also the captain, made a number of super saves to lead the team to a victory.

“It was a very tough match today,” said head coach Kim, “We ran a lot in the group stage matches and since our team’s schedule requires us to move a lot, it was physically tough. Despite all this, I’m thankful to the players for playing well.”

Korea was the first team to secure a spot in the quarterfinals. Followed by Korea, the Netherlands was the next team to do so, defeating Nigeria 3-1.

Now, the U-17 squad will have to hit the road again to head across the country for the quarterfinals match.

“It doesn’t matter which team we play against,” head coach Kim said. “I think it’s more important as to how our team plays. We’re a team that keeps on fighting until the very end. Whichever team advances, we’ll prepare well and continue to challenge them.”

The U-17 squad has never reached the semifinals.

Tuesday’s game marks the first time the team has won in the round of 16 without the game having to get to the shootout. Back in 1987, the tournament didn’t have a knockout stage. Due to this, the teams that qualified through the group stage automatically advanced to the quarterfinals. In 2009, the Korean U-17 team defeated Mexico in a penalty shootout, after the game finished with a 1-1 draw.

The U-17 team’s success is somewhat similar to the U-20 team at the FIFA U-20 World Cup in June this year.

At the time, the U-20 squad was led by Valencia CF’s young Korean prospect Lee Kang-in, giving it some serious star power. The U-17 team, however, doesn’t have any big names in its squad.

The U-20 team advanced all the way to the final and finished runner-up, losing the final match to Ukraine 3-1. The second-place finish was the best result for any Korean men’s team at any world cup.