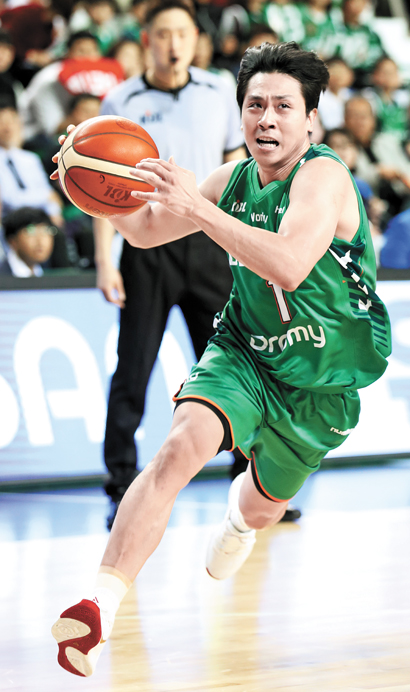 Kim Tae-sul of the Wonju Dongbu Promy plays in a KBL game against the Ulsan Hyundai Mobis at Wonju Gymnasium in Gangwon on Oct. 25. [YONHAP]

After five long seasons in a slump, Kim Tae-sul of the Wonju Dongbu Promy is finally getting back to his old form.

Kim made his debut in the Korean Basketball League (KBL) with the Seoul SK Knights in the 2007-2008 season. In his rookie season, he made headlines as the next Korean point guard to lead the sport. By averaging 10.7 points per game and playing 34 minutes and 51 seconds per game in 51 games throughout the season, he was good enough to be named the rookie of the year.

Once he joined the Anyang KGC, his promising performance continued, and when he led the KGC to win the championship title in the 2011-12 season, he was often mentioned alongside greats of the sport in Korea like Kang Dong-hee, Lee Sang-min and Kim Seung-hyun.

But Kim’s career took a turn when he moved to Jeonju KCC Egis in 2014. Throughout the 2014-15 season, Kim only averaged 26 minutes and 57 seconds per game with 6.3 points. His second season with the Egis didn’t get any better, as he averaged 4.5 points per game. His view seemed to have gotten significantly narrower and things didn’t get any better when he joined the Seoul Samsung Thunders in 2016.

His first season with the Thunders was slightly better, as he averaged 7.5 points per game, but that didn’t last long as his statistics quickly went down over the next two seasons.

Right when he was thinking about retiring, Kim was given one last shot, this time with the Promy this season. Reuniting with head coach Lee Sang-bum for the first time since the 2013-14 season, Kim’s decision to join the Promy this year seems to be the right one - he’s averaging 5.8 points per game across 10 games so far this season.

“I thought about retiring after last season ended,” Kim said. “But I came to DB telling myself to try one last time. It was a good decision. Basketball is fun again.”

In addition to points scored per game, he’s been averaging 3.8 assists and 1.3 steals per game, good enough to be ranked inside the top 10 in the league.

His statistics might not seem to be on the same level as the league’s best point guards, but considering his average playing time, Kim could be up there with the best once again.

So far this season, Kim had been playing an average 20 minutes and 57 seconds per game because of minor injuries right before the season, his physical condition and his struggle over the past five seasons.

“Considering Tae-sul’s physical condition, it’s more effective to let him play all-in in the last 20 minutes [of the game],” said Promy’s head coach Lee. “Considering his experience and ability, he doesn’t fall behind against any other guards in the league.”

When the KGC won the championship title during the 2011-12 season, both Lee and Kim were a part of the team. Lee was the head coach while Kim was a player. As they’ve previously worked together, blending into Lee’s strategy wasn’t a struggle for Kim.

“Kim Tae-sul seems to have gotten younger since joining head coach Lee, who used to be his teacher in the old days,” said commentator Kim Seung-hyun. “It’s very rare for a player to have this kind of record by playing just 20 minutes.”

Under Lee’s strategy, Kim normally gets on the court by the end of the second quarter or start of the third quarter to maximize his playing time without wearing him out.

Adding Kim in the later stages of the match clearly seems to work. During Promy’s game against the Changwon LG Sakers on Oct. 31, Kim scored 12 points with five rebounds and four assists to help the team to an 89-83 victory.

Although the club lost on Nov. 2 against the Thunders, Kim still helped the Promy in the second half by scoring seven points and adding eight assists.

“Tae-sul is fulfilling his role as our problem solver, very well,” Lee said. “His ability to read the court has been comforting for his teammates, and that’s something that can’t be converted into stats.”

“Tae-sul is a player the older and younger players all trust 100 percent,” said Kim Joo-sung.

To earn the trust of his teammates and head coach, Kim Tae-sul put in extra effort ahead of this season.

“Unlike the first half, not even little mistakes are accepted in the second half, as the result of the match is determined,” said Kim Tae-sul. “To live up to the trust from the head coach, I started practicing my specialty bank shots.”

This season, Kim hopes to repeat the success of winning the championship title with Lee.

The Promy will continue its season with a game against the Goyang Orion Orions at Wonju Gymnasium in Gangwon on Saturday at 5 p.m.