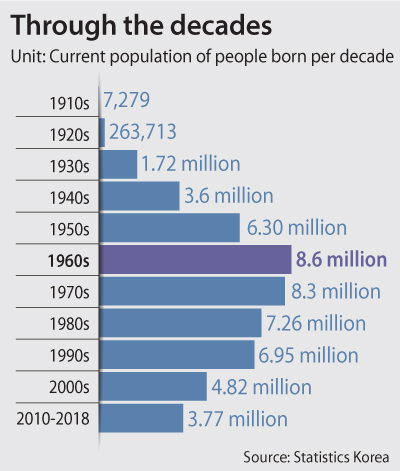 The government will shrink its military forces by roughly 80,000 by 2022, or 13 percent, while raising the ratio of female military officers from the current 6.2 percent to 8.8 percent.

It is also looking into the possibility of cutting the number of teachers - both changes dictated by Korea’s demographics, particularly a shrinking population.

Finance Minister Hong Nam-ki emphasized the need for such changes and minimizing their impact on the economy and society during a ministerial meeting Wednesday.

“There have been [growing] demands for fundamental changes in existing education, military service and administrative systems due to low birth rates and an aging population,” said Hong, who is also deputy prime minister for the economy. “As such, the government has come up with directions and projects to improve the education system to be more efficient and the military to be more competent.”

The measures announced Wednesday were follow-ups to others targeted at the shrinking population announced in September. They included increasing the budget to encourage people over the age of 60 to continue working from 17.2 billion won ($14.9 million) this year to 19.2 billion won next year. They also included loosening restrictions on foreign workers.

The government plans to restructure the military to be more centered on science and technology including drone and bot operations as well as reconnaissance satellite operations.

Additionally the military will be reducing the number of non-commissioned officers including staff sergeants while increasing skilled mid-level officers as well as the ratio of female officers.

The government will phase out the system in which some people serve their mandatory military service as riot police, correctional facility guards and fire-fighting personnel while minimizing the number working at small- and medium-sized enterprises.

Although the government did not give the estimates on the number of teachers it would cut, the number of students is already shrinking.

Hong said the government will start working on new standards next year, which will go into effect starting in 2022.

Hong said the central government will cooperate with local governments that have seen sharp declines in their populations by increasing health and welfare services.

“We will work on providing sufficient public services including establishing a connection system with surrounding regions and expanding the health and welfare services to vulnerable households including families [with physical or mental disabilities] and the elderly,” Hong said.

Despite the government spending roughly 153 trillion won since 2006 to combat it, Korea’s population continues to face a shrinking future.

Last year alone, the government committed 26.3 trillion won to boosting the birthrate, which is more than 10 times the 2.1 trillion won budget in 2006.

According to Statistics Korea, the total fertility rate has not only dropped to a new record low of 0.98, but Korea is the only country among Organisation for Economic Cooperation and Development member countries to have a fertility rate below one.