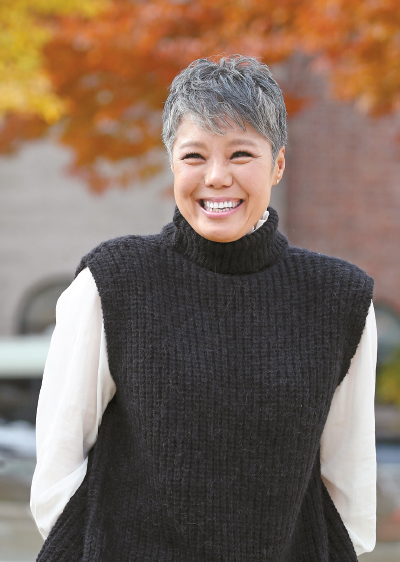 This year marks a meaningful milestone for veteran singer Lee Eun-mee. Not only is it the 30th anniversary of her debut as a singer, she has also taken the stage an astonishing 1,000 times as of this year. Having spent most her life deeply engaged in music, she is celebrating the monumental year with a concert series titled “30 Years 1,000th Thank You” and an album titled “Deeply.”

“Time has piled up slowly, and it’s become 30 years,” Lee told local press at a conference held in central Seoul on Wednesday.

“It wasn’t easy, and it almost feels like a miracle. It makes me think that I really need to work hard. It’s an amazing experience. I never thought that I would be feeling the emotions that I do now. It feels just like the moment when I first began music.”

Lee is one of the leading singers in Korea, with a slew of hits that have been enjoyed by fans from all walks of life. From when she was first invited to take part on rock band Sinchon Blues’ third album in 1989, her discography is filled with songs that shine even after years of their release, including “Into the Memory” (1992), “Some Nostalgia” (1994), “I Have a Lover” (2005) and “Breaking Up” (2009). The many years came with hiccups in her music career, which she always overcame with music.

“I am a person who lacks so much talent. It felt so difficult to feel that lack of talent, and to have to see myself every moment. I wanted to run away so many times […] But what gets me back into music is, at the end, music. When I listen to other people’s music, or when I think about what my music would be like, the music that I hear in my own imagination is what gets me on my feet again. If I feel that I want to do something again, it gets me moving and back up,” she said.

Lee gave everything she had with every concert and performance, but the year that she had her 20th anniversary was when she felt like she “really became a musician.”

“Whenever I get on the tour bus with the band and travel to so many cities, it’s just so fulfilling to think that there’s always somewhere new for me to perform. The joy of meeting new people while being on the stage, the fact that I’m alive and on stage performing - it all gives me joy,” she said.

She added, “I actually think I’ve come to a stage in life where I have to start thinking about closure as a singer and person. It’s a time where I have to embrace the falling sun. So I always give everything that I have with every performance, thinking that this may actually be my last.”

Lee says that she doesn’t have a favorite among her songs. But, she does hold “I Have a Lover” close to her heart because it helped her overcome a four-year hiatus that she took in the early 2000s. She said that she has so many songs that she would love to see get more attention, some which she may actually remake and put on her “Deeply” project. Two songs - “It Was Love” and “Yesterday Afternoon” - were released on Sept. 25, and more will follow in the coming months to complete “Deeply.”

“I’m thinking maybe six to eight songs, but I can’t be sure. Some songs turn out so well, while others lose their shape in the process. But I’m trying not to become obsessed with numbers. I want to fill it all with the works that I really like,” she said.

“The album is titled ‘Deeply’ because there’s nothing else in my life that I had been immersed so deeply in other than music. I think that I’m so lucky to have lived so happily, doing what keeps me happy. I think it’s possible because of music. I’ve aged together with it, and I’ve become much more honest towards it.”