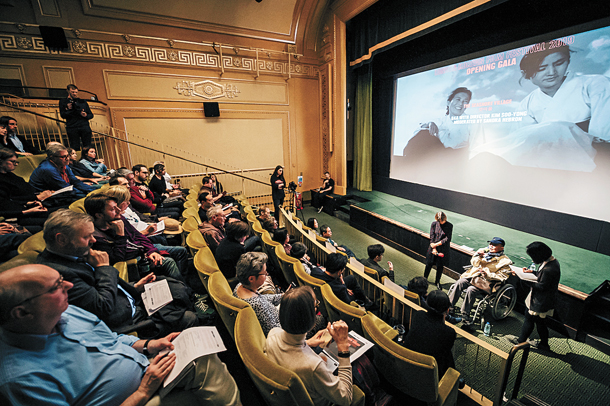 “I act kindly, but I don’t know much about women. So my wife always complains,” said movie director Kim Soo-yong. The director in his 90s sat in his wheelchair and talked with his audience at the Regent Street Cinema in London on Nov. 1. The discussion took place shortly after his 1965 film “The Seashore Village” was screened at the opening of the 14th London Korean Film Festival. The classic movie about the hard life of a widow in a seashore village was well-received by the audience that felt it “delicately depicts women in discord and fights.”

Celebrating the centennial of Korean cinema, the Korean Cultural Centre UK presented 60 Korean movies from different periods at the film festival. One member of the audience told Kim, who directed 109 films in his career, that the 1996 thriller movie “Fargo” may have been influenced by him. Kim said that when he shot the film, there was no technology or funding to shoot the scene where a fishing boat was sinking. The audience needs to be alert when watching movies today, but they can doze off through half of his movie and still understand it, he added.

The director seemed surprised as foreign viewers showed interest in classic Korean movies that many young Koreans are unfamiliar with. Kim said that for Q&A sessions after screenings in other countries, more than half of the audience leaves, and he was grateful to the London audience for staying. Director Chung Ji-young, who presented “Nambugun: North Korean Partisan in South Korea,” was asked where he got the inspiration from and how he would do it if he were to make the film again today. Chung said he actually wants to ask the audience why they came to see Korean movies.

Korean culture is common in London nowadays. As well as BTS’s hugely successful concerts at Wembley Stadium, Korean films, arts and music also get more exposure. The Tate Modern, the center of modern art in Britain, is holding the biggest retrospective exhibition of Paik Nam June since he died. Saatchi Gallery, a gateway to success for emerging artists, offers shows of young Korean artists.