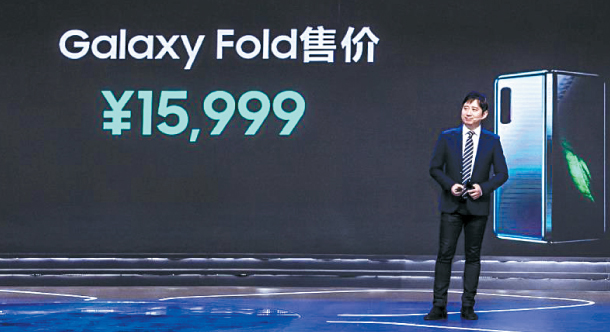 A Samsung Electronics employee reveals the price of the Galaxy Fold in China during the China International Import Expo, which started Tuesday in Shanghai. The foldable phone is to be released on Friday. [SAMSUNG ELECTRONICS]

Samsung Electronics introduced its Galaxy Fold in China on Tuesday - a week ahead of the China release of the foldable Mate X from Huawei Technologies.

Three Galaxy Fold smartphones were put on display at the China International Import Expo, which started Tuesday in Shanghai. The model is set to be released in the country on Friday. Galaxy Folds sold there will only support 4G LTE connections, a company spokesman said.

On Wednesday, Samsung revealed the product’s price in China: 15,999 yuan ($2,281). Korean media reported Samsung has prepared around 20,000 units to sell in the country, a fact Samsung declined to confirm.

The Fold’s release in China comes a week before the release of the Mate X, set for Nov. 15.

The Galaxy Fold and the Mate X were the most anticipated foldable phone releases this year. Both were announced in January, and both were delayed.

The Galaxy Fold opens like a book, with the screen on the inside. The Mate X reverses the concept. It is all screen on the outside when folded and opens into one large screen.

The Huawei device, which is priced at 16,999 yuan, will support connections to the 5G network.

It is unclear whether the Mate X will be released outside China. For the moment, China will be the only market in the world where the two foldable devices will battle.

The Galaxy Fold has been made available in the United States and other countries ahead of Korea, but the Mate X does not have a global release date, despite having been received by global IT media to much acclaim at the MWC 2019 in Barcelona, Spain, last January.

Mate X phones have a critical weakness. They will not offer some Google features, like YouTube, Gmail, Chrome and the Google Play Store app, as a result of U.S. President Donald Trump having blacklisted Huawei earlier this year. The lack of Google services was also evident on Mate 30, Huawei’s smartphone released in September.

Leadership in the Chinese market is meaningful for Samsung because it has been doing so poorly there.

In 2013, Samsung was the No. 1 smartphone brand in China, with a solid 20 percent market share. Over the last few years, it lost share as local competitors became stronger. Samsung now commands less than 1 percent of the market, according to Strategic Analytics.

The company says it will continue to fight for a larger presence in China - with a particular focus on 5G phones. 5G started rolling out in China from Nov. 1.

According to IDC China, Samsung ranked second in terms of 5G phones sold, with a market share of 29 percent between August, when sales began, and September. Samsung’s 5G phones currently sold in China are the Galaxy Note10 Plus and the A90.