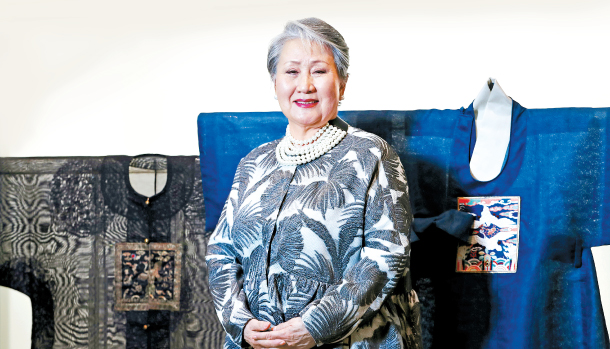 Pioneer of Korean embroidery Chung Young-yang, who is also a director of the Chung Young Yang Embroidery Museum, kicked off an exhibition titled “Serving the Celestial Throne: Court Officials’ Robes of Qing China and Joseon Korea” at the museum in central Seoul. [SHIN IN-SEOP]

Many have wondered how the royal court of the Joseon Dynasty (1392-1910), with hundreds of officials who worked to serve the royal family and the country, was able to maintain royal hierarchy. How did they memorize everyone’s names and faces and remember their ranking whenever there was a promotion?

“Embroidery was the solution,” said Chung Young-yang, director of the Chung Young Yang Embroidery Museum on the campus of Sookmyung Women’s University and the founder and CEO of the Seol Won Foundation in New York City.

Different kinds and numbers of birds and animals were embroidered on the hyungbae, also known as a mandarin square or a rank badge, and sewn on the front of the robes of royal court officials to not only decorate their attire but also maintain order inside the royal court, explained Chung. Of course there were different styles of garments and accessories carefully designed to communicate the courtiers’ status in the governmental bureaucracy, but Chung says that the rank badges during the Joseon Dynasty and China’s Ming Dynasty (1368-1644) became one of the primary visual symbols of position in the court.

The custom of attaching rank badges to officials’ robes, according to Chung, spread from China to neighboring kingdoms like Korea and Vietnam.

An exhibition titled “Serving the Celestial Throne: Court Officials’ Robes of Qing China and Joseon Korea,” kicked off at the Sookmyung Women’s University’s Chung Young Yang Embroidery Museum in central Seoul on Oct. 24, allowing visitors to compare the similarities and differences between the rank badges of many of these countries.

“The formal attire worn by public officials during the Joseon Dynasty and Chinese Qing Dynasty [1644-1911] reveals the political, social and cultural climate in which the ruling class lived,” said Chung, “as well as the proprieties and self-control of officials, who followed the principles of Neo-Confucianism.”

Left: A Joseon Dynasty (1392-1910) rank badge used by a civil official with a single crane. It is smaller than Chinese rank badges, measuring 16.3 centimeters (6.4 inches) by 18.2 centimeters. Center: A fifth-rank civil official’s insignia with a silver pheasant design. Right: Special rank badges were embroidered for large festivities like Dano, the festival held on the fifth day of the fifth month, during the Qing Dynasty. [CHUNG YOUNG YANG EMBROIDERY MUSEUM]

Over the past 15 years, the Chung Young Yang Embroidery Museum has organized about five exhibitions that have focused on embroidery. The exhibitions more or less focused on what embroidery is, the art of embroidery and the showcasing of different kinds of embroidery patterns, techniques and styles that were used in Korea and China in the past by displaying artifacts that Chung has collected over decades of her field research. But the latest exhibit to celebrate the reopening of the museum focuses on “how embroidery contributed to the development of human culture,” explained Chung.

“The people of Korea as well as China’s strong desire during the Ming and Qing dynasties to emphatically delineate their ranks resonates with their Confucian philosophy,” she said. “But at the same time, we can see distinctive differences of the rank badges of these countries due to different cultures.”

For example, the rank badges of the Ming and Qing dynasties focused on showcasing authority and power through its patterns, size and the use of materials. Compared to the Chinese rank badges, the Joseon ones are smaller and used symbols and patterns to show moderation and restraint.

At the exhibition, visitors will also find out that the wives of the Chinese civil officials wore the equivalent rank badges of their husbands.

“This is one of the major differences to Korea,” said Chung. “The women of the Joseon Dynasty could never dream of wearing a rank badge.”

Chung, who is considered a pioneer of Korean embroidery, hopes the exhibit helps international visitors become interested in embroidery, history and culture and delve deeper into their studies and compare the similarities and differences by looking at the artifacts she has collected.

“For my own research and publications, I had a difficult time traveling to different countries and getting my hands on these artifacts because I had no references,” she said. “I had to run around with my own two feet and purchase these things with my own money and collect them and study them to make the data, not to mention creating new terminologies in English. It was strenuous work, and I hope through my base work, my juniors will have an easier environment in which to study this field.”

Chung, who earned a Ph.D. at New York University in 1976, with a doctoral dissertation on the origins of embroidery and its historical development in China, Japan and Korea, has published several English-language books on embroidery. Her latest English-language book “Silken Threads: Embroidered Court Costume, and Rank Insignia Of China, Japan, Korea, And Vietnam” (2004) was hailed by critic Robert Mowry, the Alan J. Dworsky Curator of Chinese Art at the Harvard Art Museums, who wrote that Chung’s many “revelations, uncovered through intensive research since the publication of her 1979 book ‘The Art of Oriental Embroidery,’ should settle longstanding debates among textile scholars.”

“I was in tears when I read that critique,” said Chung. “I wasn’t from a rich family so when I gave up being a master craftsman in Korean embroidery and went to New York to become a scholar in this field, life wasn’t that easy for me.”

After all these years, Chung now believes that her decades of “lonesome work are coming to something.”

“It was so for our ancestors, as you can see in the exhibition, and it still is for the people of today,” Chung added. “Even if it’s a little pattern or the initials of your child on the edge of a handkerchief.”

“Embroidery, for people, is an art form of expression,” she said, “and a communication tool.”