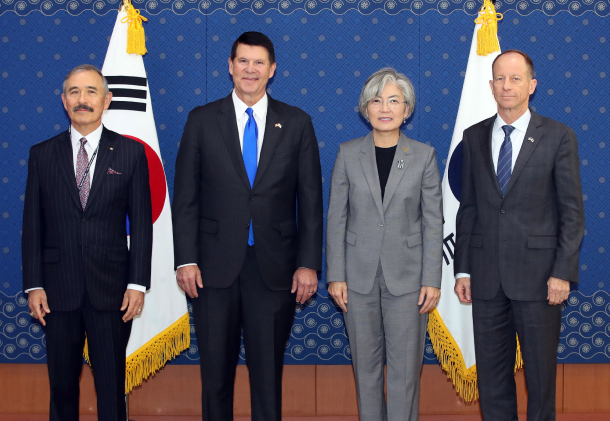 David Stilwell, the U.S. assistant secretary of state for the Bureau of East Asian and Pacific Affairs, called the meeting between the leaders of Korea and Japan this week, an “encouraging” sign of improvements in ties.

Stilwell told reporters during a visit to Seoul Wednesday that he was “very encouraged” that Korean President Moon Jae-in and Japanese Prime Minister Shinzo Abe “had the opportunity to talk” in Thailand, and added “that’s an encouraging sign as we watched the relationship improve.”

His visit came ahead of the expiration of the General Security of Military Information Agreement (Gsomia), a bilateral intelligence-sharing pact between Seoul and Tokyo, set to expire on Nov. 22, which Washington views as important for trilateral security cooperation.

Moon and Abe held a brief impromptu meeting on the sidelines of Asean-related meetings in Bangkok Monday as the two countries face tensions over the Korean Supreme Court rulings on the wartime forced labor issue last year and Japan’s export restriction measures implemented since July. It was their first meeting in over a year and follows Japan’s removal of Korea from its so-called white list of preferred trade partners and Seoul’s decision in August to terminate Gsomia with Tokyo.

Stilwell, who arrived in Seoul Tuesday as part of an Asia tour which included a stop by Tokyo, also met with Korean Vice Foreign Minister Cho Sei-young, and Defense Ministry and Blue House officials.

U.S. officials visiting Seoul this week also included Marc Knapper, the deputy assistant secretary for Korea and Japan, and James DeHart, who serves as Washington’s chief negotiator for the defense cost-sharing agreement with Seoul. The visits come as Seoul and Washington are wrangling to renew their bilateral Special Measures Agreement, which expires at the end of December, with the United States pushing for a drastic increase in Korea’s share in stationing U.S. troops here.

The Blue House in a statement said that Kim Hyun-chong, the second deputy chief of the National Security Office, held separate talks with Stilwell and Gen. Robert Abrams, commander of the U.S. Forces Korea, for 70 minutes and had “constructive and future-oriented discussions” on issues including Gsomia and the negotiations on renewing the bilateral cost-sharing agreement.

Stilwell and Abrams were said to have stressed that the alliance was the “linchpin” for regional security, according to the Blue House.

The two sides agreed to “continue consultations to resolve the various alliance issues dealt with by Korea and the United States in a future-oriented manner.”

Krach led a U.S. delegation to attend a vice-ministerial economic dialogue and a joint public-private economic forum, and meet with representatives of Korean and U.S. businesses.

The Korean Ministry of Foreign Affairs in a statement said that Kang and the U.S. officials “exchanged opinions on various issues of mutual concern including ways for reciprocal development of Korea-U.S. relations and regional cooperation and Korea-Japan relations.”

Kang said she looks forward to the economic dialogue and forum being an opportunity to “stably expand bilateral cooperation including on the connectivity of the New Southern Policy and the Indo-Pacific Strategy.”

Kang said on relations with Japan that Korea has been doing its “utmost to find a reasonable solution through dialogue,” according to the ministry, and the U.S. officials recognized that the efforts had been “encouraging” and that such efforts need to continue in the future.

Stilwell told reporters following his talks at the Foreign Ministry that the “alliance is the linchpin of peace and security here in the Indo-Pacific region.”

He called to “further strengthen” what was discussed in Bangkok at the East Asia Summit earlier this month, noting the release of a joint document “that identifies areas where Indo-Pacific Strategy and New Southern Policy overlap.” He said that “they are significant in the areas where we identify mutual interest and cooperation.”

The two governments adopted on Monday a fact sheet following bilateral consultations at the East Asia Summit on working together to promote cooperation between Korea’s New Southern Policy and the U.S. Indo-Pacific Strategy.

This cooperation, the document describes, is “based on the principles of openness, inclusiveness, transparency, respect for international norms, and Asean centrality.” It also aims to promote prosperity, people-to-people ties and peace, key points of the Moon administration’s New Southern Policy first revealed in 2017 as a vision of economic and diplomatic cooperation with Asean and India. The Indo-Pacific Strategy which was also unveiled by U.S. President Donald Trump in late 2017 is seen as a policy trying to contain China.

The joint statement on the Senior Economic Dialogue said the meeting “provided an opportunity to take stock of progress and explore avenues to further cooperation” between Korea and the United States, “particularly in line” with the New Southern Policy and the Indo-Pacific Strategy.