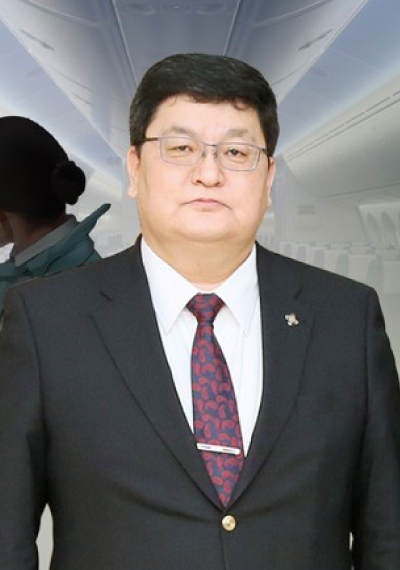 The top justice of Mongolia’s Constitutional Court was arrested upon his arrival at Incheon International Airport on Wednesday and immediately taken to the Incheon Metropolitan Police Agency to answer questions about allegations he groped a Korean Air flight attendant on a plane last week.

Odbayar Dorj, 52, faces allegations that he grabbed the buttocks of a flight attendant in her twenties on the night of Oct. 31 during his flight from Ulaanbaatar, Mongolia, to Incheon International Airport, according to officers from the Incheon police agency and the airport police.

The chairman of the Mongolian Constitutional Court is known to be denying the allegations so far, saying he’s being mistaken for another Mongolian passenger.

Dorj was on his way to attend a board meeting of the Association of Asian Constitutional Courts and Equivalent Institutions in Bali, Indonesia. Incheon was his layover.

Korean Air workers on the flight, who hold the authority to arrest misbehaving passengers on a plane, apprehended the two Mongolians and handed them over to the airport police at around 9:40 p.m. that day, shortly after their arrival at Incheon International Airport.

But Dorj and his co-worker claimed they held diplomatic immunity, citing the Vienna Convention on Diplomatic Relations, which enables diplomats to receive immunity from arrest, criminal prosecution and civil lawsuits from the countries they are posted to. In this process, according to Korean police, the Mongolian Embassy in Seoul weighed in and said Dorj and his colleague were indeed subject to the Vienna Convention.

Airport police then wrongly released the pair - who are not, in fact, protected by the treaty.

It was only after the police contacted the Ministry of Foreign Affairs to verify whether Dorj receives diplomatic immunity that they realized he doesn’t. The Mongolian Embassy could not be reached on Wednesday for comment.

Police returned to Incheon International Airport on Saturday afternoon and discovered Dorj waiting for his flight to Bali. Officers took him to an investigation room at the airport and asked him about the alleged sexual assault, to which he responded that a different Mongolian person groped the flight attendant, not him. Dorj said he would return to Korea after the conference in Bali.

The second suspect, Dorj’s colleague, was not at the airport on Saturday when police arrived. It appears he departed for Singapore, though for what reason remains unclear.

Incheon police received an arrest warrant for both Dorj and the other suspect on Tuesday and enforced the warrant for Dorj on Wednesday morning as he touched down at Incheon International Airport from Bali.

Korean police have up to 48 hours to keep him in custody and decide whether to release him or ask prosecutors to file for a pretrial detention warrant.

Police said they were consulting with the Mongolian Embassy to bring the other suspect back to Korea for questioning.

Montsame, a Mongolian news agency, reported last Saturday that a spokesperson of the Mongolian Constitutional Court said the media reports accusing Dorj of sexually assaulting a flight attendant were “groundless and false.”

“An attempt was made to blame the chairman of the Constitutional Court in the act of misconduct possibly committed by another citizen of Mongolia, who was sitting in the row behind him during the flight to Korea,” the statement reportedly read. “Chairman of the Constitutional Court D. Odbayar has turned to corresponding organizations concerning the wrongful accusation.”

The two alleged victims told police they were “offended” by the Mongolians and wanted them punished.