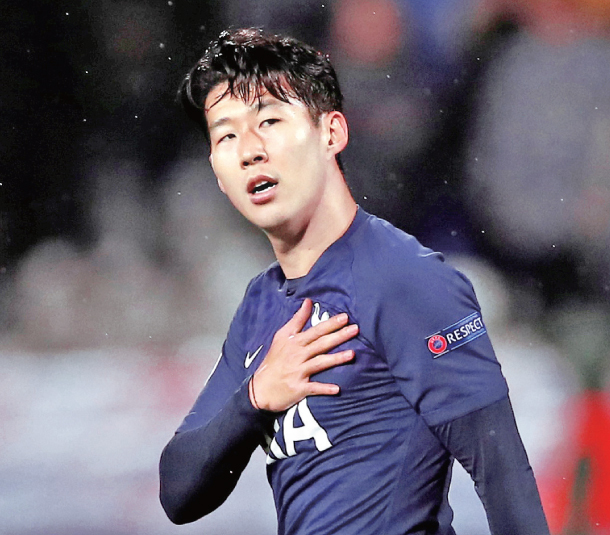 Son Heung-min of Tottenham Hotspur celebrates after scoring a goal during a UEFA Champions League Group B match against Red Star Belgrade at Rajko Mitic Stadium in Belgrade, Serbia, on Wednesday. [REUTERS/YONHAP]

Son Heung-min of Tottenham Hotspur made history again on Wednesday.

By scoring two goals during Spurs’ UEFA Champions League Group B match against Crvena zvezda, a Serbian side also known as Red Star Belgrade, at Rajko Mitic Stadium in Belgrade on Wednesday, Son extended his European career goals to 123, good enough to break the record for the most number of goals ever scored by a Korean player in European football. Cha Bum-kun held the previous record at 121 goals.

Giovani Lo Celso scored the opening goal of the match in the 34th minute. At the top of the second half, Son doubled Spurs’ lead, assisted by Dele Alli, in the 57th minute. Just four minutes later, in the 61st minute, Son scored Spurs’ third goal of the match, this time assisted by Danny Rose. As Christian Eriksen scored another in the 85th minute, Spurs picked up a big 4-0 win.

With the win, Spurs are ranked second in Group B with two wins, a draw and a loss, totaling seven points. Bayern Munich is the leader in the group with an undefeated record of four wins, totaling 12 points.

“I think it’s so important to win this game,” Son told BT Sport. “I think we had a good attitude from the start and we played really well, scored the goals [in the] first half. I think [we have to] take this confidence in the coming games.”

Looking at Son’s personal statistics, he is having another great season with Spurs. He has now scored seven goals for the season. As Son is only 27 years old, considered the peak of his career, he is expected to further extend his streak.

Throughout Son’s European football career, he scored 20 goals with Hamburger SV, 29 goals with Bayer Leverkusen and now 74 goals for Spurs.

In addition to the new record, Wednesday’s performance was also a chance for Son to fight back after a late tackle went horrifically wrong in a game just a few days ago.

During a premier league match against Everton at Goodison Park on Sunday, Son received a red card “for endangering the safety of a player which happened as a consequence of his initial challenge,” according to the Premier League. The red card has since been overturned on appeal.

The incident happened in the 77th minute of the game, with Spurs leading 1-0. After what appeared to be a late tackle from Son, Everton’s Andrea Gomes went down hard, with his foot appearing to get caught in the turf before he collided with Spurs’ Serge Aurier. Gomes was left with a bad fracture dislocation of his ankle, requiring immediate hospitalization and surgery.

Son was initially given a yellow card, but the decision was overturned by the Video Assistant Referee and he was sent off.

After the game, Son was given a three-match ban, but as Spurs won the appeal, the decision was overturned.

After Son scored his first goal on Wednesday, he celebrated with a prayer-like motion, where he had his hands together, wishing for Gomes’ fast recovery.

“Of course, it was a really tough few days,” Son told BT Sport. “I have realized how lucky I am with all the support I have had from the fans and my teammates. I can say I’m really sorry for the accident and the situation, but I had to focus for the team and I had to keep going and it was the right response to all the people who have supported me.”

Spurs will continue its season with a Premier League match against Sheffield United F.C. at midnight on Saturday night, Korea time.