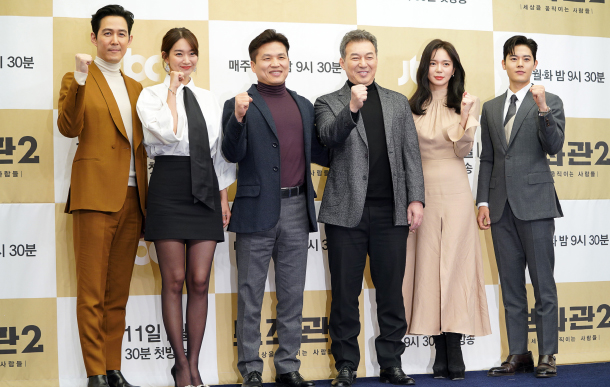 JTBC political drama series “Chief of Staff” is back for its second season, with former chief of staff Jang Tae-Joon (played by Lee Jung-jae) risking everything to climb up the political ladder to get his revenge.

The first season of the drama ended with Jang having more than enough of a motive to do whatever he can to rise to the top when his mentor, assemblyman Lee Sung-min, commits suicide, unable to withstand the political pressure from his boss, Song Hee-seob, the ruthless national assemblyman (played by Kim Kap-soo). Song eventually succeeds in reaching his goal of becoming the next Justice Minister in the season finale.

After his mentor’s death, Jang becomes determined to acquire power and become a Parliament member himself so that he can avenge Lee and also bring justice to the world.

With the series of political scandals that brought down former Justice Minister Cho Kuk in the news coinciding with the release of the drama, director Kwak Jung-hwan admitted that the plot of this season closely reflects reality, although it was completely coincidental.

“After the success of the drama series ‘SKY Castle,’ I thought that we should do another series covering the sensitive educational issues in Korea,” Kwak said at a press conference on Thursday.

“Initially, the character Song was going to be the Minister of Education. But after discussing it with the show’s writer, we decided that we would cover the legislative branch.

“Although dramas are created to be entertaining for audiences, I always hope that they can also have a certain perspective or throw in a message that people can think about. In that sense, I do think that the story mirrors reality.”

In the second season of the show, characters old and new will form intricate but flexible relationships with one another, constantly doubting each other and switching sides for gain and their goals.

“I don’t know [whether or not] politicians will see this drama or not,” Kim Kap-soo said. “But I wanted to show [people] how those people wield their power and what eventually happens to those that use that power wrongly.”

Although the characters’ motives or relationships might differ from the first season, the biggest transition, of course, is Jang’s state of mind as he enters Parliament with fierce determination and bigger ambitions to achieve more.

“I still think that Jang’s initial purpose to bring justice to the world did not dissolve,” said Lee when asked about his character. “Of course, getting revenge for his mentor’s death has made him more power hungry, but I think his two motives balance each other out.”

The director also singled out Jang’s political journey as the most charismatic point of the second season.

“Due to the influx of new characters and changes in the relationships of former characters, viewers will be constantly on the edge of their seats to see the one man’s lonely struggle to achieve [what he wants].”

The second season of the JTBC drama series will premiere on Nov. 11 and air on Mondays and Tuesdays at 9:30 p.m. The first season is available on Netflix, and the second season will also air on the streaming service.