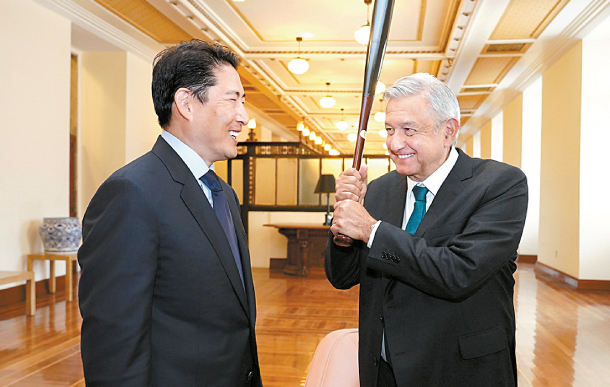 The ATM contract was Cho’s doing, as he attended meetings with Mexican government officials since October 2018. The actual partnership was signed last September, a Hyosung spokesman said.

The “Rural ATM” project is a government-led initiative to install ATMs in rural areas, from which beneficiaries of financial welfare support can withdraw cash.

Once installation is complete, the Korean company’s ATM share in Mexico will reach 15 percent, from the current 2 percent. The company is a domestic leader in ATMs, with a 60 percent market share. It has the No. 1 market share for ATMs in the United States, 46 percent in terms of the number of ATMs sold this year.

“The Rural ATM Project will be an opportunity for Hyosung Group not just in terms of business but also in fulfilling a company’s social responsibility,” said Cho during his meeting with the president. “I’ll make sure the project is completed without setbacks so our ATMs can contribute to improving the lives of those in need and to the system for Mexico’s welfare delivery.”

After expressing his thanks to President Obrador on the ATM deal, Cho expressed willingness to work with the Mexican government on establishing electricity infrastructure and renewable energy.

Cho repeated his ambitions to high-ranking government officials during his trip. The Mexican government is ramping up investments in oil, gas and power generation. The Hyosung chairman has been hands-on when it comes to the company’s global business, meeting with heads of state and top ranking officials since he took the company’s helm in 2017. The list includes Indian Prime Minister Narendra Modi and Vietnamese Prime Minister Nguyen Xuan Phuc.