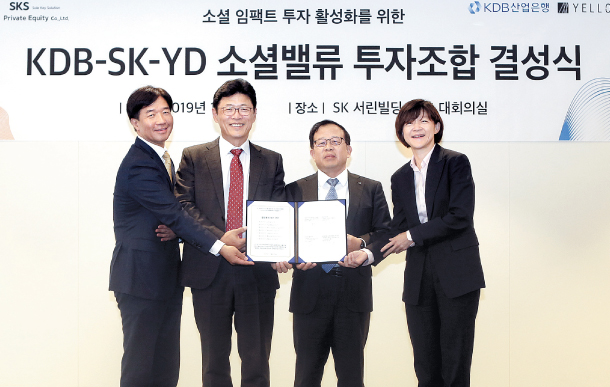 The conglomerate said on Thursday that Happynarae, a social enterprise founded by SK, will commit 10 billion won to the fund, while the state-run lender will contribute 20 billion won.

The combined funding offered by participating companies amounts to 42 billion won, and the remaining 8 billion won will be added next year, according to the group.

SK touted the fund as the biggest put together specifically for start-ups with an eye on social impact.

“Interested start-ups’ business must align with the 17 Sustainable Development Goals drawn up by the United Nations, working on improvement in education, health, climate change and the development of sustainable cities,” the conglomerate said in a statement.

The company went on to note that the move is in line with SK Chairman Chey Tae-won’s emphasis on social values and the growth of enterprises devoted to social causes.

The initiative, however, won’t be limited to finance - participating units will “offer a wide range of support,” which could include consulting on business operations.

The funding is the latest in a series of financial commitments aimed at supporting social impact enterprises.

Back in 2017, SK launched an 11-billion-won fund with KEB Hana Bank and then joined Shinhan Financial Group in creating a 20 billion won fund.

The previous funds were used to help scale up start-ups such as Sangsang Woori, a unit focused on creating jobs for the elderly, and SmartSocial, which specializes in deploying artificial intelligence for job hunting.

“I hope that the fund will help boost the influx of private capital into impact investment,” Chang said.

Impact investment refers to the investing trend that factors in the social benefits a company can create on top of the financial returns.

SK expected the fund to help create an ecosystem for companies aiming to benefit society.

“[SK] expects that the fund will help social enterprises gain recognition from the mainstream capital markets, which will lead to the creation of an ecosystem for them,” said Lee Hyung-hee, head of the social value committee run by SK’s decision-making body SK Supex Council.