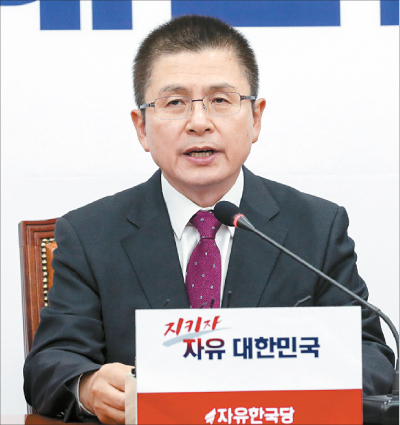 Rep. Yoo Seong-min, a leader of the Bareunmirae Party, said Thursday that a grand merger of conservative parties will only be possible if the Liberty Korea Party (LKP) admits the legitimacy of President Park Geun-hye’s removal from office.

In a meeting with reporters Thursday, Yoo, a fourth-term lawmaker and presidential candidate in 2017, responded to LKP Chairman Hwang Kyo-ahn’s proposal from the previous day of a grand merger. “I will actively pursue a political union with everyone who upholds values of our liberal democratic constitution and market economy,” Hwang said in a press conference.

Shortly after Hwang’s Wednesday announcement, Yoo said he would seriously consider the offer. “If it is intended to fundamentally rebuild the conservatives for the sake of the Korea’s future, I will seriously consider it,” Yoo said.

In contrast, the Our Republican Party denounced the proposal, making clear that it wouldn’t cooperate with anyone who supported Park’s 2016 impeachment and removal in 2017, including Yoo.

On Thursday, Yoo elaborated on his stance. He described three preconditions for the creation of a new conservative group: The group must be a reformist conservative party; the participants must shelve all their old political practices and build a completely new system; and the new group must acknowledge the legitimacy of Park’s removal.

“I know that these three principles are extremely difficult for LKP members to accept because I was with that party for 17 years,” Yoo said. “If the LKP doesn’t take seriously my preconditions or tries to trick me, a merger will never happen.”

Yoo started in politics in 2004 with the Grand National Party, a predecessor of the LKP. He was the chief of staff for Park in 2005, when she was the chairwoman of the party.

Once a key ally, he fell out with Park when she was president over a political deal he had made with opposition parties to pass sensitive bills. She issued a lengthy, angry criticism at his “politics of betrayal” in 2015. Yoo, the party’s floor leader at the time, stepped down from the post.

After becoming a leader of the anti-Park faction, Yoo left the party and successfully ran for a National Assembly seat as an independent in 2016. He eventually founded the splinter conservative Bareun Party, which later merged with Ahn Cheol-soo’s People’s Party to form the Bareunmirae Party.

When he talked to reporters on Thursday, Yoo was adamant that the LKP must admit the legitimacy of Park’s removal. “The conservatives are still pointing fingers at one another about an issue that happened three years ago,” Yoo said. “If they continue to blame one another and hold one another responsible, it will be impossible to unite the conservatives.

“The impeachment was a constitutional decision, and it is now history,” Yoo continued. “If they insist they won’t accept this, it is against my principles. The LKP must make its position clear about it.”

When Hwang held a media conference on Wednesday, he made an ambiguous remark about the Park issue. “I, the LKP and all other conservative politicians are responsible for the situation that led to the impeachment,” Hwang said. “We cannot be free from the responsibility that we failed to stop a high-handed, incompetent leftist administration take power.”

Yoo also said he will push a plan to establish a new, reformist, moderate conservative party, rather than just waiting for the LKP to make a decision and facilitate a merger. “I have strong faith in what we want to do,” Yoo said. “This is not a temporary plan.”