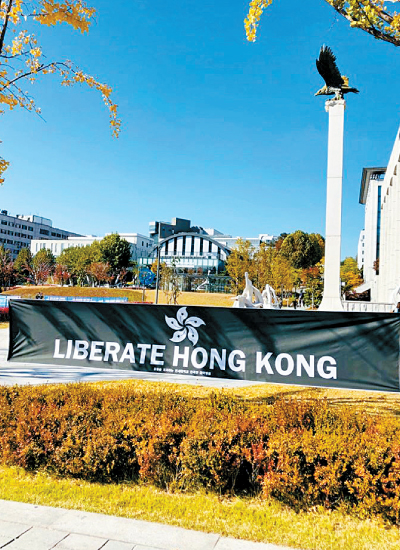 A banner hung by a group of Korean students at Yonsei University on the school campus late last month. [KOREAN STUDENTS AT YONSEI UNIVERSITY WHO SUPPORT HONG KONG]

Political tensions between Korean students and Chinese nationals appear to be simmering at Yonsei University in Sinchon, western Seoul, after a Korean student recently revealed he saw some Chinese people tearing down banners that were hung by a group of Korean students in support of the Hong Kong pro-democracy movement.

The Korean group, whose name loosely translates as “Korean Students at Yonsei University Who Support Hong Kong,” said in a statement on Oct. 25 that it hung the banners at four different locations on the campus at around 7 p.m. on Oct. 24 but discovered that, within the next 24 hours, they were all gone.

The banners read “Liberate Hong Kong” and “Free Hong Kong. Revolution of our times.” The group contacted the school’s administration team to inquire whether Yonsei faculty members got rid of them but was told that the school was not involved in their removal.

On Wednesday, the Chosun Ilbo interviewed a Korean student at Yonsei University who said he saw a group of two men and three women taking down the banners with a pair of scissors at around 9 p.m. on Oct. 24 while chanting “One China.”

The Korean student said the five people told him they were Chinese when he approached them to block them and also said he should “stay out of other countries’ business,” adding, “Hong Kong citizens are arousing chaos.”

A member of the Korean Students at Yonsei University Who Support Hong Kong told the Korea JoongAng Daily Thursday that the group contacted the Korean student who spoke with the Chosun Ilbo and was planning to release an official statement soon.

The member, who wished to be identified only as a Korean student attending Yonsei, said he and his “few” colleagues were discussing whether to put up more banners around the campus.