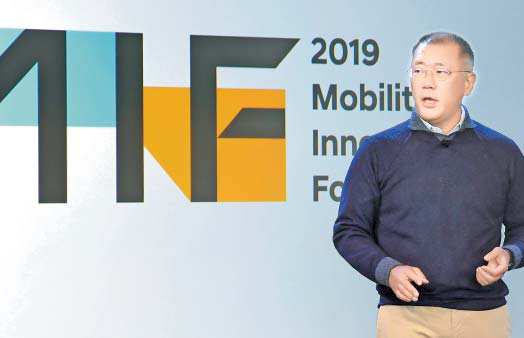 Hyundai Motor Group announced Friday that its direction for future mobility will be shaped by a so-called human-centered philosophy.

“Cities and mobility services were developed for humans from the very beginning,” said the group’s Executive Vice Chairman Euisun Chung at the 2019 Mobility Innovators Forum held Thursday in San Francisco. “That’s why we are making a wide range of efforts to study a human-centered future from a broader humanities perspective.”

The forum, marking its fourth year, is an annual event held by Hyundai Cradle, the unit focused on identifying and investing in innovative start-ups.

In a move to pursue its human-centered philosophy, the group said it has set up the Human-Centered City Advisory Group that comprises of experts from various fields such as engineering, urban planning and psychology.

According to Chung during his keynote speech, while new mobility services involving electric cars and micro scooters have been released, it is hard for these services to fully bloom without a proper city plan.

The advisory group established early this year has been researching a way to realize a city design that can create new human-centered values, Hyundai said. Its goal is to develop a blueprint for ideal future cities.

The group said it plans to unveil the results of the research early next year.

In a separate project, the group has also been conducting the 2050 Future City Project to make predictions on future cities in different regions with global experts. This will help it find new business opportunities.

On the sidelines of the forum, Chung said he is discussing various partnership opportunities with ride-sharing companies like Uber and Lyft for future mobility service development. On the recent announcement by Uber that flying taxis will be available in 2023, Chung said he thinks a more realistic timeline would be 2029 as relevant legislation needs to be in place.