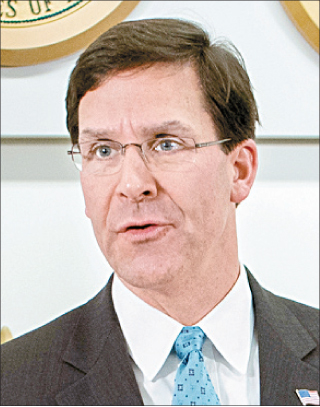 U.S. Secretary of Defense Mark Esper will visit Seoul next week to address a series of regional issues including Korea’s decision to end a military information sharing pact with Japan and the cost of keeping U.S. troops in Korea.

“In South Korea, Secretary Esper will attend the 51st U.S.-ROK Security Consultative Meeting where he will meet with his counterpart and other senior South Korean officials to discuss the Alliance and reaffirm our commitment to enhancing our bilateral defense cooperation to address issues of mutual importance to the security and stability of the Korean Peninsula and the Indo-Pacific region,” the U.S. Defense Department said Thursday in a press release, referring to the acronym for the Republic of Korea, or South Korea.

Esper will be in Seoul from Wednesday to Friday and meet with Defense Minister Jeong Kyeong-doo and other senior officials.

One of the major topics of the Esper-Jeong meeting is the renewal of a cost-sharing agreement for the 28,500 American troops in Korea. James DeHart, the U.S. chief negotiator for the cost-sharing deal, was quoted by a Korean lawmaker as telling Korean lawmakers and officials that Korea should pay approximately $4.7 billion in alliance upkeep costs - around five times the amount it currently pays to keep U.S. forces stationed on its soil.

Esper is also visiting Seoul ahead of the expiration of the General Security of Military Information Agreement (Gsomia) between Korea and Japan. The pact will formally end as of Nov. 23.

Washington has made clear that it wants Seoul to reconsider its decision to withdraw from the agreement, stressing that it is key to trilateral security cooperation in the region to check China and North Korea. U.S. Assistant Secretary of State for East Asian and Pacific Affairs David Stilwell was in Seoul earlier this week and met with senior Korean officials including Deputy National Security Advisor Kim Hyun-chong to pressure Korea to renew the pact.

Pentagon spokesman Jonathan Hoffman said during the Thursday’s press briefing that Esper will address the Gsomia issue. “I can practically guarantee that it will be part of our conversations when we’re in Korea next week,” he said.

“We’re hopeful. We’re optimistic. We’re going to continue to push on,” Hoffman said. “It’s something that we would like to see resolved, so that all of us can focus on the biggest threats in the region, which is North Korea’s activities, and then the Chinese efforts to destabilize the region.

“We’ve tried to work around some of this with regard to being able to do some of the bilateral information-sharing between each of us to try to keep going through,” Hoffman said, adding that Esper had continued to address Washington’s concerns to his Korean and Japanese counterparts ever since it was raised.

A diplomatic dispute between Seoul and Tokyo over historical issues led to a tit-for-tat trade spat. After Japan removed Korea from a list of trusted trade partners in July, Korea responded by announcing the next month that it would not renew the Gsomia with Japan.

A Korean military official admitted Friday that the Gsomia issue could be discussed at the next week’s meetings. “It is not on the official agenda of the consultation, but it can be mentioned when we discuss security cooperation,” he said. “But our stance would remain unchanged.”

The Moon Jae-in administration has said it would reverse its Gsomia decision if Japan retracted economic retaliations it imposed, citing lack of trust between the two countries. Foreign Minister Kang Kyung-wha repeated that position at the National Assembly on Friday.

“It was an unavoidable decision caused by the feud between Korea and Japan,” she told the National Assembly’s Special Committee on Budget and Account. She also said Seoul knew about the repercussion. “Before announcing the decision, we had given enough thought to the possibility that it will impact our efforts to manage relations with other countries,” she said.

She also said it will affect the Korea-U.S. alliance. “We anticipated the disappointment of the United States,” she said. “I won’t say that there is no problem in [Korea-U.S. relations], but we have a strong will to manage the aftermath and further strengthen the alliance.”

She admitted that North Korea and China will benefit from the termination of the Gsomia.

Kang also said the United States has demanded a significant increase in Korea’s payment for the upkeep of the U.S. troops here. “I understand that it is an issue that requires the National Assembly’s approval,” Kang said. “I will keep that in mind during the negotiations.”

Meanwhile, no sign of change in Japan’s approach to the ongoing row with Korea was seen.

“The security system won’t be affected by the absence of the Gsomia with Korea,” he said. “But complimentary intelligence can be shared. Terminating the agreement also does not send a proper message amid the current situation, where Korea-U.S.-Japan cooperation is crucial.”

A conservative Japanese newspaper reported Friday that Japan’s distrust of Korea is growing after Moon’s brief meeting with Abe earlier this week. Moon and Abe sat down for an 11-minute talk on the sidelines of an Asean summit in Bangkok on Monday.

“Korea took an unauthorized photo of the two leaders’ meeting and publicized it,” reported the Sankei Shimbun. “Korea unilaterally tried to publicize the dialogue, so Japan’s distrust toward Korea is growing stronger as a result of the meticulously planned ambush.”

The report suggested that Director of National Security Chung Eui-yong took an unauthorized photo of the meeting between Moon and Abe, and Japanese officials are enraged about it. It said only the two leaders and their interpreters were allowed to enter the room, suspecting that Chung, who had access to the summit, must have taken the photo.

“Abe shook hands with 10 leaders who were in the waiting room, and he shook hands with Moon last,” a Japanese official was quoted as saying, adding that it was difficult for Abe to turn down Moon’s offer to have talks.

The newspaper said the Blue House had meticulously planned the so-called impromptu meeting, but the Japanese government had made no such preparations, especially about the release of a photo.

The Blue House shot down the Japanese report. “We haven’t received any complaint about the photo,” said a presidential official. “There were other leaders in the same room. If it were a private dialogue, it could have been a problem, but I want to tell you that it was an open space.”