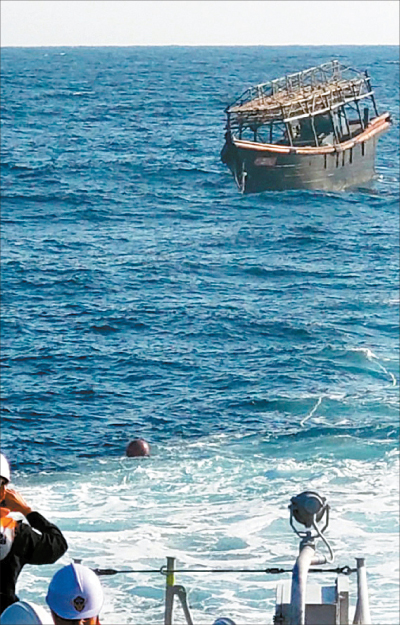 The boat used by two repatriated North Koreans accused of murdering 16 of their fellow crewmen is towed back to the North by a South Korean ship Friday. [UNIFICATION MINISTRY]

As questions swirl about the case of two North Koreans who fled to the south after allegedly killing 16 fellow sailors, controversy has arisen about the constitutionality of Seoul’s decision to repatriate the duo five days after their capture.

Several members of a North Korean defectors’ rights group were seen protesting outside the Central Government Complex in Seoul on Friday, calling for the Unification Ministry to take responsibility over what they claim was an improper execution of justice.

According to the South Korean government’s investigation into the case, the two North Koreans, both men aged in their 20s, first set sail aboard a squid boat from the North’s Kimchaek harbor in North Hamgyong Province on Aug. 15 with 17 other sailors.

Rep. Lee Hye-hoon, chair of the National Assembly’s Intelligence Committee, said the National Intelligence Service’s reports showed the duo, along with a third accomplice, plotted sometime in late October to take revenge on the ship’s captain who had incessantly subjected them to physical abuse. They ended up murdering the captain using an axe and two hammers, then killed the other 16 sailors who were asleep in the lower deck after bringing them above deck in pairs. The bodies were dumped at sea, Lee said.

The report said the three alleged killers then decided to flee to the North’s sparsely populated Chagang Province, but one of them was captured at Kimchaek harbor after they briefly docked there to obtain funds for their escape. The other two fled aboard their boat, eventually crossing the maritime border into South Korean waters.

After attempting to evade the South Korean Navy by crossing the maritime border several times, the duo was eventually captured after special forces operatives boarded the boat and immobilized them, according to the South’s Defense Ministry.

In the investigation that followed, the two North Koreans asked to defect to South Korea, but the government eventually chose to repatriate the two sailors.

They were handed off to the North’s authorities through the Koreas’ land border at Panmunjom on Thursday, while the boat they used was also given back to the North on Friday.

Given the extraordinary circumstances of the case - unprecedented in inter-Korean history - the decision to expel the sailors continues to be subject to heavy controversy over its legality.

Lawmakers of the main opposition Liberty Korea Party, who were the first to make the issue public before the government announced the expulsion decision, raised doubts as to just how three people were able to murder 16 others on a small boat, which measured only around 15 meters (49 feet) long and weighed 17 tons, and were able to evade North Korea’s own naval surveillance to escape to the South.

South Korea’s lack of a judicial procedure on the alleged crime also invited protests from civic groups, which cited that the sailors had the right to a trial given that the South Korean Constitution does not recognize North Korea and considers all its residents as citizens of South Korea.

“In terms of the question of North Korea’s statehood, there has always been a disparity between official regulation and reality,” said Kim Eun-han, the Unification Ministry’s deputy spokesperson. “North Korea’s de facto jurisdiction is acknowledged.”

In that context, Kim added that the North Korean duo’s request for asylum could not be accepted, particularly given their repeated attempts to evade South Korean maritime authorities and based on their subsequent testimonies, in which they said their plans were to escape justice.

The fact that the alleged crime occurred in North Korean territory and the lack of evidence on hand also factored into Seoul’s repatriation decision, the spokesperson added.