Ahn Song-yi picked up her first career win at the ADT CAPS Championship 2019, the KLPGA Tour’s last tournament of the season. 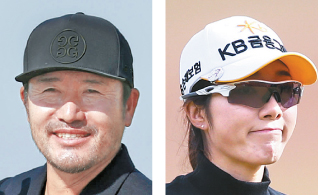 By shooting one under par 71 on Sunday, Ahn picked up a wire-to-wire victory at Woo Jeong Hills Country Club in Cheonan, South Chungcheong.

Ahn finished the tournament at nine under par, 207, one shot ahead of runner-up Lee.

With a win, Ahn took home 120 million won ($104,000). Throughout Ahn’s 10-year career on the KLPGA Tour, she’s never picked up a win. This season, before her win on Sunday, Ahn competed in a total of 27 tournaments and had seven top-10 finishes.

Now that the KLPGA Tour’s 2018-19 season has officially ended, the Player of the Year and the winners of other season-long statistical categories have been finalized. Choi Hye-jin, who finished the tournament tied for 35th at three over par, will be named the Player of the Year. In addition to the prestigious award, Choi also won the money title, lowest scoring average and the most number of wins in a single season, at five.

The 2019-20 season of the KLPGA Tour starts at the Hyosung Championship with SBS Golf at Twin Doves Golf Club in Vietnam, which starts Dec. 6.

In men’s golf, Choi Ho-sung picked up a win on the Japan Golf Tour (JGTO) by winning the Heiwa PGM Championship at PGM Golf Resort Okinawa on Sunday.

Choi, who started the final round with a one-shot lead ahead of JGTO’s money leader Shugo Imahira, shot a bogey-free round of four under par, 67, to finish two shots ahead of Imahira for a win. Choi and Imahira were tied for the lead until the par-3 16th, but as Choi made a birdie while Imahira made a bogey on the par-4 17th, Choi was declared the winner. Choi finished the tournament at 14 under par, 270.

“I was very nervous,” Choi was quoted as saying on JGTO website. “But I tried to be calm and stick to my golf.”

Choi first hit the headlines at the Kolon Korea Open in June. His swing, dubbed the fisherman swing, quickly spread through social media and caught the eye of international press. Choi’s swing got so popular on social media that it was even commented on by former world No.1 Justin Thomas. Fans started posting videos of themselves imitating the unique move.

Choi’s swing was developed as it worked to hit the ball farther. Since Choi started golf later in life than his competitors, he thought of ways to hit the ball as far as the younger players.