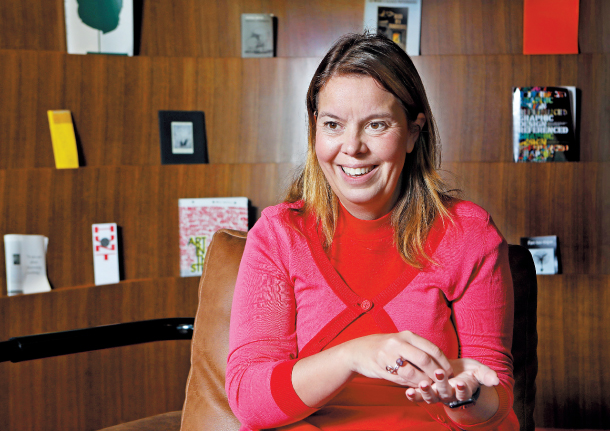 A designer’s role is to do more than make something beautiful. They also interpret the world and communicate in a common language everyone can understand, according to Lisa Lindstrom, a co-founder and CEO of Swedish design firm Doberman.

She is also the chair of the Swedish Design Awards jury and the Swedish Educational Broadcasting Company.

To share her opinions on the importance of creativity and innovation in business operations, Lindstrom visited Korea to attend the Korea-Sweden Design Forum, which took place at Kintex in Goyang, Gyeonggi, last week. The forum was part of Design Korea Festival, hosted by Ministry of Trade, Industry and Energy.

“Designers apply their skills to solving complex and important challenges in the world, not just making something easier to use or making them look more beautiful,” said Lindstrom. Designers can have greater influence as “writing down in a report is far away from the language everyone understands.”

Doberman, founded in 1998, is a consulting firm that designs products, businesses and services. It helps start-ups materialize business ideas and guides conglomerates to diverge from the existing traditional values to try new business strategies.

It has now become the largest independent design firm in Sweden. Its turnover last year was 118 million Swedish krona ($12.2 million).

Its clients include IBM and Volvo, as well as start-ups Oscar and Wealthsimple. Oscar, a New York insurer founded in 2012, is valued at $3.2 billion and has more than 250,000 members. Toronto’s Wealthsimple, an online investment management service, manages $4.5 billion in assets and has more than 150,000 clients.

In 2018, Doberman was recognized as the best workplace in Sweden by Almega, the employers’ organization for the Swedish service sector.

Based in Stockholm, it opened an office in New York City in 2013.

To discuss more about the role of creativity in business operations, Lindstrom sat down for an interview with the Korea JoongAng Daily in Hongdae, western Seoul, on Thursday.

Q. You gave a speech at the Korea-Sweden Design Forum on Thursday. How was the forum? Did you meet anyone or see any company that captured your interest?

A. At the forum, there were a lot of really great design companies who really excel in product design. I was fascinated by the number of companies focused on using design and technology through robots that could be used to improve health care and well-being. No one that stands out, but all in all, I was impressed by the product design.

Why are designers important in business innovation?

Machines, robots and computers are able to crack so many problems, but companies are going to look for even more creative and innovative solutions when technology becomes more advanced. People are playful, curious and non-linear. People understand they shouldn’t smoke or eat junk food. We know they need to change their behavior, but we don’t follow those rules. But when we fall in love, or find something appealing and interesting, our willingness to change our behavior grows bigger. Creative people are able to explain rules and logic that could change people’s behaviors.

So, you’re saying designers will have more opportunities in the technology-driven society. How could technology change the world of design?

Technology can help us do anything we want. We need to know all the progressive technologies to make sure the innovation we come up with is relevant, modern and efficient, but technology shouldn’t be the driver of that innovation. We always need to start with people and understand their needs. Then we can go out to solve the issues with technology. But we should never fall in love with technology because life isn’t a mechanical thing.

Where do you think creativity is derived from?

Doberman was recognized as the best workplace in Sweden by Almega. What does it mean by best, and how do you pull that off?

Work-life balance is one of the qualities of being the best. We’re really good in executing work-life balance. Being a good employer is to understand how different people work and design an environment that best works for them. We also include people in the decision-making process. People today want to participate and have meaningful jobs, not just execute jobs. They want to feel they’re owning their every day. Another crucial point is to make sure people are themselves at work.

Swedish firms are generally known to offer good work-life balance to employees. Why does Doberman stand out from other Swedish companies?

I agree we generally have good value when it comes to quality and diversity. But I think all companies of today, including those in Sweden, have been designed to follow particular formats of business. I’ve spent the last 20 years thinking about how I could use all the capacity of 100 employees to participate with all of what they have.

To do so, I do a lot of interactions with employees. When voting, for instance, employees stand on the floor. I ask questions, and if they agree to the question, they take a step forward. This enables introverted people to take part in communication without having to speak up. Also, everyone is involved in budgeting at Doberman. Designers are usually not that interested in Excel, but at Doberman, we simplify finance into the language they can understand like translating budgeting into poker. Designers would choose which sector they hope to bet more money on. These kinds of attempts are not typical Swedish [attempts]. That’s creativity.

How do you think Korea and Sweden could collaborate in terms of designing a business?

In Sweden, we’re not scaling our companies fast enough. There are few really big companies, and then we have thousands of small companies - nothing in between. Firms in Korea scale up very fast, but people here don’t seem to express themselves as much due to the politeness in how they interact with people. That may put a bit of shadow from all that creativity and interesting thinking you can get out of people. So integrating the innovation capacity of Sweden and the scaling capacity of Korea would be a great collaboration.

The classic DNA marker of Swedish design is its humane characteristics. It’s very much empathetic for the people it’s aimed at. It’s approachable, and in that sense, magnetic. That’s probably why it’s also pretty universal and viable from a commercial perspective around the world. I would say these characteristics are partly rooted in the democratic and social structures that are the fabric of our country. You could say it reflects what we value and how we live our lives. Design for everyone.

To me, Korean designs are so many things. On one hand, it is great attention to details that seems to be rooted in a long history of solid craft. On the other hand, it is very contemporary, extremely technology driven and fast to pick up influences from all over the world. In contrast to the pretty clear Swedish design DNA, my impression is that Korean design characteristics are more changeable over time and constantly adapting.

We still struggle to see female CEOs in Korea. Are female CEOs just as rare in Sweden? Have you ever experienced the glass ceiling while doing business?

Yes, female CEOs are also rare in Sweden, but I’ve never seen a glass ceiling. If you’re raised knowing you have boundaries, you’re going to look for those boundaries. I’m raised as a person, not as a woman. As a person who was never told about a “glass ceiling,” I personally haven’t seen it. But in the society, I see it all the time.

I use [my gender] to my advantage. For instance, if there’s a technology conference and there is no woman, I offer to give a talk.

Do you think dividing female and male leadership is meaningful?

I don’t think we should divide people when it comes to leadership. People are people in their own way. But I think we need to look at numbers and make sure we’re not having any barriers for talents out there regardless of gender, age or ethnicity.