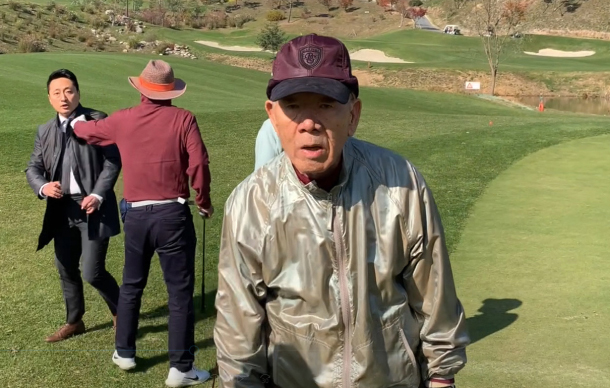 A member of the Justice Party video-recorded former President Chun Doo Hwan, right, playing golf recently on a golf course in Hongcheon County, Gangwon, despite claiming that he suffers from Alzheimer’s disease. [YONHAP]

Former President Chun Doo Hwan, on trial for defaming a late Catholic priest by denying his account of the military’s bloody crackdown on democracy protesters in Gwangju in 1980, went golfing recently despite claiming that Alzheimer’s disease was behind his delayed appearance at the trial.

“Tell me Mr. Chun if you have any words to offer regarding the Gwangju massacre,” Lim asks Chun in video footage that Lim’s acquaintance took during the encounter Thursday, which was aired on JTBC’s evening news program that day.

“What’s the Gwangju incident got to do with me?” Chun responds in the video footage.

At this point one of Chun’s acquaintances tells Lim, “Please, he is in weak health.”

“How can a man in weak health be playing golf?” Lim responds in the video.

Lim asks Chun several more times to explain his position regarding the Gwangju incident, to which Chun responds with, “I don’t know about the massacre,” and, “Why am I responsible when I didn’t have authority to make decisions at the time?”

According to Lim, the conversation lasted 10 minutes, during which Chun responded to Lim’s questions with clarity that made him question Chun’s claim of suffering from Alzheimer’s disease - a claim that Chun’s family and lawyers made to the court to repeatedly push back his attendance at the trial from May 2018 to March this year.

“He walked with a spring in his step at the golf course that made it hard to believe that this was an 88-year-old man claiming to be ill,” Lim told JTBC. “In my conversation with Chun, he knew exactly what I was asking him about and responded with clarity. I could tell that the claim about Alzheimer’s disease was a lie.”

Chun was charged last year with libeling the late Father Cho Pius, a key witness of the Gwangju uprising of May 18 to 27, 1980, which called for democracy and an end to Chun’s junta’s rule. Cho, a religious leader and democracy activist who died in 2016, testified that the military had opened fire on protesters from helicopters during the crackdown.

Chun published a memoir in April 2017 largely defending his authoritarian presidency amidst the Moon Jae-in administration’s campaign to re-evaluate a series of controversial events from the country’s modern history. “Father Cho Pius is a shameless liar who does not deserve the title of a religious priest,” Chun wrote on page 484 of the memoir. Chun also called the late priest “Satan wearing a mask.”

The prosecution said various records substantiate that the military opened fire on protesters from helicopters. In February 2018, a special investigation committee of the Ministry of National Defense announced the outcome of a probe that looked into the massacre of pro-democracy protesters by the Martial Law Command. It confirmed for the first time that the military fired on demonstrators from helicopters.

Although the Gwangju District Court wanted to start the trial in May 2018, Chun repeatedly delayed his attendance citing poor health, including Alzheimer’s disease. In January this year, the court issued a subpoena to begin the trial, and Chun finally showed up for his trial for the first time in March.

The key to the ongoing trial on Chun is whether Chun had known that it was false to say there was no helicopter shooting when he denied the late Father Cho’s testimony and whether Chun had the intention to defame Cho. If convicted, Chun will face up to two years in prison or a fine of up to 5 million won ($4,400).

Chun was previously prosecuted in 1996 on charges of conspiracy and insurrection to hold him accountable for a 1979 military coup and the deadly crackdown on the 1980 Gwangju uprising. The uprising was brutally crushed by the military. While the official death toll was 193, hundreds more are believed to have been killed or injured by armed soldiers.

Although Chun was initially convicted and sentenced to death, his punishment was later reduced to life imprisonment. He began serving jail time in April 1997, but his sentence was commuted by President Kim Young-sam in December 1997 on the advice of incoming President Kim Dae-jung, an iconic democracy advocate.