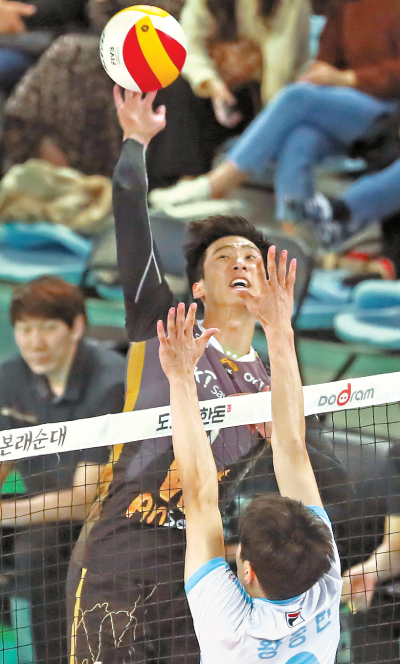 Song Myung-geun of the Ansan OK Savings Bank Rush & Cash is hoping to lead his club to the top of the standings this season.

After three seasons of missing the postseason, the Savings Bank got off to a great start by winning all five of their matches. Behind their success, Song seems to have ended his slump and is picking up his pace.

Although the club is now in a two-game losing streak, they are seeing a big improvement this season by ranking second with five wins and two losses, totaling 15 points. They are only two points behind the Incheon Korean Air Jumbos.

Although the season just started, his performance was good enough to win the league’s first round MVP.

Song made his Korea Volleyball Federation (KOVO) debut with the OK Savings Bank in the 2013-14 season, after graduating from Kyonggi University in 2013.

There weren’t high expectations placed on Song when he joined the league, but that changed when he teamed up with the OK Savings Bank’s new foreign player Robertlandy Simon in 2014.

Working alongside Simon, Song learned to not only strengthen his playing, but also his mind. Through the process, Song reached the peak of his career, where he was named the 2014-15 season championship MVP and was named as one of the best seven players during the 2015-16 season.

But it wasn’t only the club that benefited from the addition of Simon. After Simon left, Song was quickly forgotten in the KOVO and dropped from one of the league’s top players to the ranks of just a normal athlete. Making matters worse, a knee surgery in 2016 knocked his confidence.

During this time, Song focused on recovering from surgery, and finally, during the 2018-19 season, played in all the matches. They’ve made a slight improvement in the regular season making it to fifth in the standings, but the team had a long way to go to get back to its former glory days.

But this season, he’s returned to the court as a different player. With head coach Suk Jin-wook, the two focus a lot on communication.

“I’ve told Myung-geun that it’s already been two years since he got the surgery,” Suk said. “I told him that talking about his injuries are just an excuse. But I don’t just give him harsh comments. As head coach and a player, I’ve asked him what he wanted and told him what I wanted from him.”

After a long talk between the two, Suk assigned Song as the club’s outside hitter. This was only possible as OK Savings Bank’s new foreign player Leo Andric, known as Leo, was a right hitter. The position change turned out to be the right choice.

“As we prepared for the season, I think our head coach took extra care of me,” Song said. “I want to show the head coach that I can play well. When I was working on defense and blocks, our head coach invested a lot of time in me. I’m finally seeing the results of the practice.”

Despite a strong start, the OK Savings Bank’s stride came to a quick end. During their match against Uijeongbu KB Insurance Stars on Oct. 30, Leo got injured and is expected to be out for about three to four weeks. But rather than releasing him and finding his replacement, Suk decided to wait, leaving more pressure on Song.

OK Savings Bank’s unbeaten record may have ended on Nov. 5, when they lost 0-3 to the Cheonan Hyundai Capital Skywalkers and 2-3 to the Seoul Woori Card Wibee, but Song is continuing his success.

Against the Skywalkers, Song added 10 points and led the match in defense, at 5.33. Then, against the Wibee, Song once again scored double-digit points by scoring 26 points.

The OK Savings Bank will continue their regular season with a match against the Bluefangs on Wednesday at Sangnoksu Gymnasium in Ansan, Gyeonggi, starting at 7 p.m.