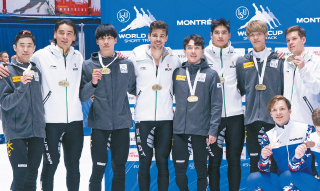 Team Korea, in gray, share the podium with Team Hungary after a tie for the gold medal in the men’s 5,000-meter relay at the ISU World Cup in Montreal Sunday. [AP/YONHAP]

The men’s relay team finished with a dramatic gold in the 5,000-meter relay, clocking 6 minutes and 55.968 seconds. Their time was good enough to share gold with Team Hungary.

Korea wasn’t in the best position in the relay, until the very last lap. Ranking third in the relay, Hwang Dae-heon sprinted in the last section to quickly make his way up to the lead. Hwang stretched his left leg to shove his blade across the finish line just in time to tie with Hungary.

Hwang and Hungary’s last skater, Shaolin Sandor Liu, crossed the finish line at the exact same one thousandth of a second after a video review.

The women’s team didn’t win as many medals as the men’s but did manage to pick up one gold. Kim Ji-yoo picked up a gold in the 1,500-meter, finishing ahead of her teammate Noh Do-hee. Surprisingly, the women’s team failed to advance to the final in the 3,000-meter relay.

Team Korea saw a huge improvement in the second leg of the World Cup, picking up four golds, three silvers and four bronzes in Montreal.

During the first leg in Utah last week, Korea walked away with two golds, both won by Hwang, three silvers and two bronze.

The fourth leg of the ISU World Cup will be held in Shanghai, starting from Dec. 6 to 8.