Yoon Sang-hyun
The author is the chairman of the National Assembly’s Foreign Affairs and Unification Committee.

Only ten days are left before the termination of the Korea-Japan General Security of Military Information Agreement (Gsomia). After the Korean Supreme Court ruled on Oct. 20, 2018, that individual victims of forced labor are entitled to seek compensation from their Japanese employers during the colonial period, a diplomatic row worsened between Korea and Japan and a catastrophic end is approaching.

The Korean government said it would reverse the decision to withdraw from the Gsomia if the Japanese government retracts its export restrictions on Korea. But this is not a matter of who will act first. The ruling on the forced labor - the starting point of the conflict - should be resolved first.

The two countries failed to find a breakthrough even after a meeting between President Moon Jae-in and Japanese Prime Minister Shinzo Abe on the sidelines of the Regional Comprehensive Economic Partnership (RCEP) summit in Bangkok last week. The United States turned down the Blue House’s request for mediation. If the Gsomia is terminated, trilateral security cooperation among Korea, Japan and the United States will collapse. In that case, North Korea, China and Russia will be the victors. Liberal democracy and the market economy that Korea and Japan protect together will face attacks from totalitarianism.

We can find a clue to resolving the current situation in the Joint Declaration of a new Korea-Japan partnership toward the 21st century by President Kim Dae-jung and Japanese Prime Minister Keizo Obuchi in 1998. “Looking back on the relations between Japan and the Republic of Korea during this century, Prime Minister Obuchi regarded in a spirit of humility the fact of history that Japan caused, during a certain period in the past, tremendous damage and suffering to the people of [South] Korea through its colonial rule, and expressed his deep remorse and heartfelt apology for this fact,” the joint statement said. “President Kim accepted with sincerity this statement of Prime Minister Obuchi’s recognition of history and expressed his appreciation for it. He also expressed his view that the present calls upon both countries to overcome their unfortunate history and to build a future-oriented relationship based on reconciliation as well as good-neighborly and friendly cooperation.”

But the bilateral issues that the two leaders tried to get over in the last century have not been settled. A new partnership for this century has not been established. 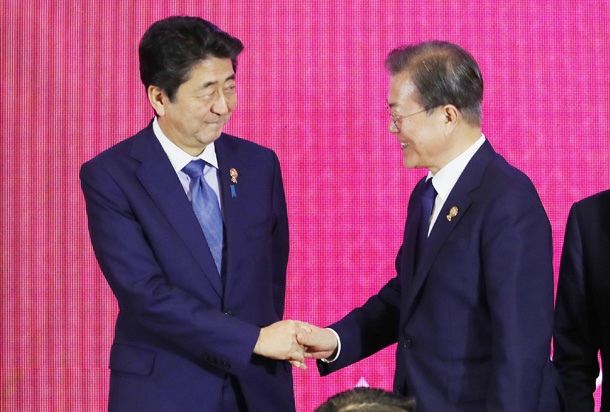 Of the colonial rulers of the imperial period, none - not England, France, Germany, Russia or the United States - has admitted to its responsibility for aggression and made compensation. Abe will not make a different decision. It is not political obstinacy but it is a limit of historical perception. Now, President Moon is the only leader who can make a decision.

It is the role of a leader to make a hard decision when one is needed. The worst decision is not making a decision. It is imminent that a Korean court will allow the victims to sell off the seized assets in Korea of Nippon Steel. Then, Korea-Japan relations will fall into a deeper quagmire. Now is the time for a decision.

You need a bold decision for a grand compromise. The Korean government must declare that it will pay the victims of forced labor with its own budget and end the dispute. This is a way to tell Japan that Korea will no longer demand compensation and end the Korea-Japan conflict. By doing so, Seoul will be able to stand on higher moral ground than Tokyo, while respecting the 1965 pact.

In 1965, Korea was one of the poorest countries with a per capita annual gross national income (GNI) of $130. At the time, Korean leaders and diplomats tried their best to save the country. In 2018, Korea’s per capita GNI is $30,600, the world’s 30th highest. The country’s GDP is the 12th largest.

We also should do our best. We must make a decision - although it is hard - and do our best to persuade the people. That is politics. Politics means making a decision to assume responsibility.

If the government makes that decision, it will be a bold, grand decision to open a path of reconciliation with Japan. Then the Japanese government will face the additional burden to repent and apologize for its history of aggression. It will become indebted to follow the model of Germany that overcame Nazism. As forced labor victims have long demanded a sincere apology from Tokyo, this will force Japan to do so. The Korean government must make a decision and become a victor of history. We only have 10 days left.