Gov’t may crack down on stars on soju bottles

Gov’t may crack down on stars on soju bottles 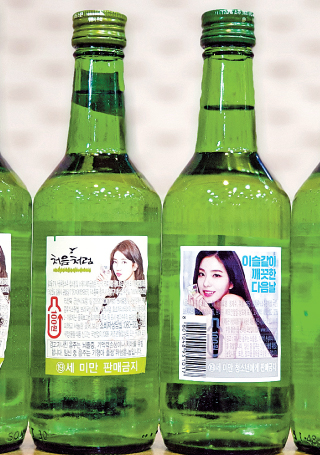 Pictures of fetching female celebrities on soju bottles may be a thing of the past.

The Ministry of Health and Welfare said last week that it is considering prohibiting pictures of models to be printed on soju bottles as early as next year.

The ministry wants to cut the drinking rate among adolescents. While no final decision has been made, the ministry is hoping for the new restrictions if experts give the green light.

“Korea is the only country that allows photos of female celebrities on [alcoholic beverages] among OECD member countries,” she continued.

While Korea has a designated office for trying to reduce smoking in the country, there isn’t anything similar for drinking. The government has allocated 138.8 billion won ($119 million) for activities to curb smoking this year. A similar budget to deal with excessive drinking stands at 1.3 billion won.

This is not the first time booze advertising became an issue. In 2015, when Korean female singer IU became a brand representative for Hite Jinro’s Chamisul soju at the age of 21, the National Assembly’s Health and Welfare Committee voted for a regulation that would prohibit people under 24 from appearing in alcohol advertisements.

The idea generated a lot of criticism - people said it was unfair - and the bill died. But a series of academic reports have emerged since outlining the connection between alcohol advertisements and underage drinking.

According to a 2017 study by the Ministry of Health and Welfare and Sogang University, people frequently exposed to alcohol advertisements rated drinking more positively than the less exposed.

While the study said it could not make a statistically meaningful connection among advertising elements for drinking behaviors, it claimed that 19 foreign studies ruled that being more exposed to alcohol advertising in the mass media increased the likelihood of underage drinking and the amounts of alcohol consumption.

The latest attempt at alcohol advertising restrictions also addresses the idea of sexual objectification of female models in soju advertising.

According to a study by Sungkyunkwan University, Soju advertisements are inclined to use female models to appeal to male consumers.

The report says that soju advertisements tend to choose female celebrities as models to target male consumers while having those models pose in a sexually appealing manner.

The Ministry of Health and Welfare said it is also reviewing the sexual objectification aspect of soju advertisements but added it will also consider opinions from liquor companies and advertisement agencies before making any regulatory fixes.